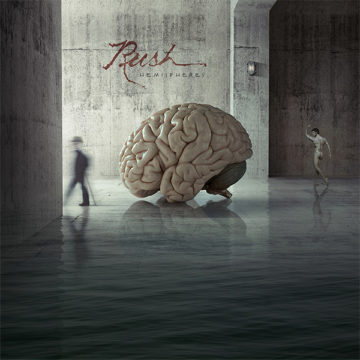 While Rush may be done recording new music and touring as a band, their catalogue lives on with their recent 40th anniversary celebrations as they remaster and repackage their discography, the latest of which being their 1978 classic, Hemispheres. While multiple editions and deluxe packages exists – ranging from digital downloads to a massive box set including two CDs, one exclusive Blu-ray Audio disc, and three high-quality 180-gram black vinyl LPs and a forty page hard cover book featuring memorabilia from the time and an extensive essay from Toronto musicologist Rob Bowman – at the centre of each edition is the Abbey Road Studios 2015 remastered edition of Hemispheres and a live recording from the 1979 Pinkpop Festival.

Naturally, Hemispheres remains a classic even four decades onward. Back in 1978, this was a pivotal album for not only not only Rush, but for progressive rock as well. From the opening tack, “Cygnus X-1 Book II: Hemispheres” (which takes up a whole album side on its own), through “Circumstances” and “The Trees”, to “La Villa Strangiato”, Hemispheres remains a progressive rock opus and a thrilling and beyond impressive display of both songwriting and musicianship.

The live material, primarily from 1979’s Pinkpop Festival – with “2112” recorded at a concert in Arizona on November 20, 1978 – remains entirely unreleased, making it quite the exciting addition to the 40th anniversary of Hemispheres. The live set opens with a stellar performance from the power trio on “A Passage To Bangkok”. From Hemispheres, “The Trees”, a portion of “Cygnus X-1 Book II: Hemispheres”, and a show stopping performance of “La Villa Strangiato”, along with classics such as “Xandu”, “In The Mood”, and “Something For Nothing”. The band is incredibly tight as they flawlessly shift through melodic, harmonic, and rhythmic modulations with guitarist Alex Lifeson especially shining as he reminds the listener exactly why he is the guitar god that he is. Other highlights from their set include the performance of a brief section of “Cygnus X-1 Book II: Hemispheres” which seamlessly transitions into “Closer To The Heart”, and explosive drum solo from the legendary Neil Peart, and a show stopping performance of  “2112”

The 40th anniversary of Hemispheres certainly packs a punch as Rush reintroduces one of their strongest records to the world. Hemispheres remains an essential classic and with the addition of their 1979 Pinkpop set, Rush perfectly encapsulates their sound in and out of the studio from this era of their career. That being said, I am left feeling curious as to what else is kicking around in the vault from their period; unfortunately, with the abundance of deluxe reissues of albums, a simple remaster and live album seems a bit small when you consider the size, quantity, and quality of most recent reissues (see Guns N Roses and Metallica’s recent releases). Despite that, Hemispheres – 40th Anniversary is something that the diehard fans will love and the more casual fans – such as myself – will thoroughly enjoy.

A passion for music has always been a part of Gerrod’s life. As a young boy, he was raised on a steady diet of the music from The Chili Peppers, Aerosmith, The Stones, Prince, and others from his mum. Raised in the GTA, Gerrod continued to foster his love for music by attending a wide range of concerts and learning the drums. His unapologetic passion for music has no bounds and has spread to a wide variety of styles, whether it be the 90’s rock that sound tracked his teenage years, the jazz he studied in university, or his newfound love for hip-hop. He recently received his bachelors in music and education from York University and is passionate about writing and reviewing good (and less than good) music. Gerrod is also the drummer and songwriter for a Toronto based rock & roll band, One In The Chamber.
RELATED ARTICLES
album reviewalbum reviewsrush
7.0