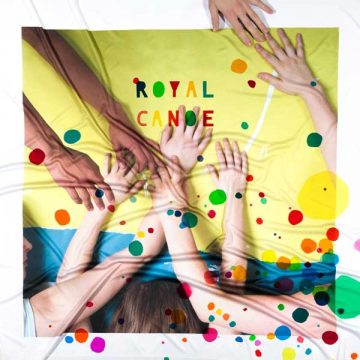 In its half-decade reign over the Canadian music scene, Manitoba Indie six-piece Royal Canoe has managed to stand uniquely beside its Canadian counterparts. But nothing in its career gets more out of orbit than their aptly titled, fifth, full-length effort. The tongue-in-cheek title truly encapsulates a record whose themes and sounds are both, indeed, extraterrestrial.

Something Got Lost Between Here and the Orbit boasts itself as Royal Canoe’s most expansive record yet, where an array of unique sounds (ranging from using water bottles as mics to the sound of a Beluga whale calling) seem to take control as lead singer in some of the songs. Take “Bicycle,” for instance, whose instruments are held tightly together by electronic musings in an upbeat dance track until they climax and melt into something softer as the song sputters out its final, gentle remnants. One track you are likely to recall after one listen alone is the standout “Love You Like That,” whose schoolyard taunting sound is handled with an overwhelmingly well-produced touch; its handclapping sing-along chorus is just catchy enough that it never gets annoying. Then there’s “How Long Is Your Life,” a blend of Hip-Hop verses and Gospel-inspired choruses, all successfully handled by a bunch of white guys from Manitoba. Who would have thought? Speaking of genre blends, “Walk out on the Water” is unquestionably the album’s best track. That wonderful delivery of “Uh oh hallelujah!,” which is somehow reminiscent of a softened Kendrick Lamar fronting something as absurdly unfitting as Passion Pit, is enough to give the track a spot in a list of this year’s best songs.

The production overall sparingly lets any cracks become visible, but some moments were bound to lose their luster with their oversaturated layers of electric bliss. “Checkmate” sounds a bit too Walk the Moon in that its electronics limit it to one genre. The experimental “I am Collapsing so Slowly” also feels a bit adrift when it plays between better efforts. Closer “BB Gun,” while being laden with wonderful jazz instruments near the end, remains forgettable against the flashiness of the rest of the album as well.

The risks Royal Canoe takes definitely outweigh the losses. It may just be difficult for us to find ourselves returning to the entire album for a replay instead of focusing on the better material and forgetting about the rest. Those better moments, though, are indeed some of the band’s best.

Here's what we think...
Spill Rating
Fan Rating
Rate Here
New Criteria
10
9.0
7.0
Total Spill Rating
9.0
Total Fan Rating
You have rated this
Album Reviews
how long is your lifelove you like thatnevado musicroyal canoesomething got lost between here and the orbitwalk out on the water
how long is your life, love you like that, nevado music, royal canoe, something got lost between here and the orbit, walk out on the water
About the Author
Robert Defina

Robert Defina is an avid critic both on paper and in person. He spends more time writing album reviews than he does worrying about his future. He hopes that this sort of procrastination never grows old.
RELATED ARTICLES
love you like thatnevado musicroyal canoe