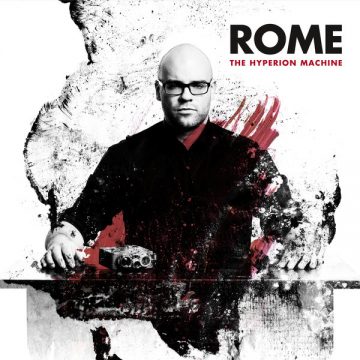 The first track is entirely made of whispering words in German. The 23 seconds of whispering is a great way to open up since it’s always nice to have a little extra something added in an album like spoken word tracks, silence to build up suspense, or other creative content. Throughout the album, there is more of that spoken word, and some even shouted by what may be a woman or a child. Small touches like that (when used well) always make a track sound that much more interesting. In this case, it all adds to the dark and solemn vibes in The Hyperion Machine.

Speaking of themes, while there aren’t any Shakespearian references in this particular album, there is some Greek Mythology. Hyperion was one of 12 children of Gaia, the Titan of Earth. Legend says Hyperion killed his father, Uranus, ruler of the skies, only to be later overthrown by the Olympians. Although the lyrics don’t specifically reference Hyperion or his story, it doesn’t make the lyrics any less poetic or beautiful. It does, however, reference Diotima, who was the priestess who taught Plato about love. There’s also mention of the ancient city of Alabanda, located in Turkey.

There are quite a few songs featured that really left an impression. “Cities of Asylum” is catchy despite how deep and sad it is, compared to “Stillwell,” which itself is slow and haunting. “Skirmishes for Diotima” is beautiful as well. “The Secret Germany” opens like an old song of lore and transforms into something more modern sounding. “Die Morder Muhsams” would have been a nice way to close off the album and wrap things up by another chanting track, but so is the bonus track, “Fanfanfan,” with its poetic lyrics.

What’s also nice about The Hyperion Machine is that it isn’t a complete replica of the previous album. Sure, there are similarities because it is, after all, created by the same musician, but it’s not the exact same like many other artists.

Overall, The Hyperion Machine is great for anyone who enjoys neoFolk, emotional and melodic music, or minor historical references.

Music and writing have always been a big part of Sabrina's life. She would "borrow" her dad's rock and metal CDs from his collection and listen to them while going through the art books. Although she doesn't write angsty poetry anymore, she does have a Bachelor's Degree in Journalism which she uses to pursue a creative career path. When she's not writing, Sabrina can be found juggling a coffee cup and DSLR or Instagramming her food.
RELATED ARTICLES
album reviewsrometrisol music group
8.0