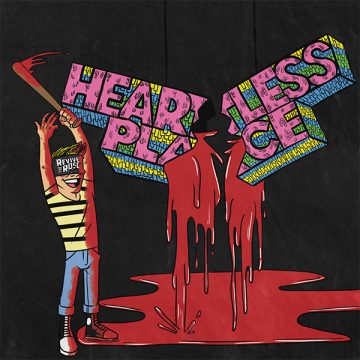 Welland, ON’s very own Revive The Rose has been absolutely killing it. From booking shows in support of The Trews to launching their own beer, Bar Down Lager, it only makes sense that the hard rock band follow up a string of 2021 singles with a brand-new EP. Heartless Place is the latest from the band and is their first collection of new music since their 2019 self-titled, full-length album.

Opening with the jangly riff of “Need You Now”, Revive The Rose is back with a refined sound. More melodic but just as hard-hitting, with its halftime verse shifting into an up-tempo chorus, “Need You Now” is a strong opener that raises the bar for the rest of Heartless Place. Between Andy Colonico’s throaty, Grohl-inspired vocals to the guitar solo at the end of the track, “Need You Now” is a song that only builds in excitement. The album picks up with the pop-rock influenced “World’s Smallest Violin”. Driven by the reoccurring and catchy backing vocals, this song – the only not to be previously released as a single – has a distinct early 2000’s rock vibe to it. The first half of Heartless Place culminates with the title track, an anthemic and riff-heavy song that kicks ass. “Heartless Place” especially shines for its unique, instrumental bridge and slide guitar solo, a pair of back-to-back moments that are definite highlights.

Heartless Place continues with “Don’t Think Twice”, a primarily acoustic pop-rock ballad that further links Revive The Rose with the modern rock genre popular today. The subtleties on the track – from the electric guitar in the background to the lush use of backing vocals – make “Don’t Think Twice” standout tonally from the rest of Revive The Rose’s work. “Two Feet”, on the other hand, is a lively and rhythmic alternative rock tune that, without a doubt, is both the strongest and most unique track on Heartless Place. The rhythmic pulse, driven by the acoustic guitar and use of layered electric guitars, effects, and vocals, makes for a truly exciting listening experience. Heartless Place concludes with “Live My Best Life”, featuring Amy Gabba. The song hits the hardest on the record and stands out for its ska influences – especially in the verse. The inclusion of Gabba breathes extra life into the song, making her verse a strong point on the song.

All in all, Revive The Rose continues to prove their worth as one of Ontario’s strongest and most reliable up and coming rock bands on their latest release. Heartless Place marks a step forward in songwriting and delivery, and should leave fans excited to see where the band will go next.

A passion for music has always been a part of Gerrod’s life. As a young boy, he was raised on a steady diet of the music from The Chili Peppers, Aerosmith, The Stones, Prince, and others from his mum. Raised in the GTA, Gerrod continued to foster his love for music by attending a wide range of concerts and learning the drums. His unapologetic passion for music has no bounds and has spread to a wide variety of styles, whether it be the 90’s rock that sound tracked his teenage years, the jazz he studied in university, or his newfound love for hip-hop. He recently received his bachelors in music and education from York University and is passionate about writing and reviewing good (and less than good) music. Gerrod is also the drummer and songwriter for a Toronto based rock & roll band, One In The Chamber.
RELATED ARTICLES
album reviewalbum reviewsrevive the rose
9.0