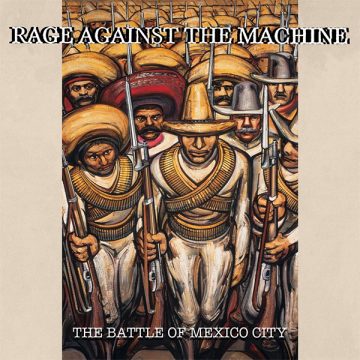 Rage Against The Machine
The Battle Of Mexico City
Sony Music

It was as if the stars had aligned. Next to a reunion of Appetite era Guns N’ Roses, the return of Rage Against The Machine is often coveted as one of the most hoped-for reunions, and then it happened. A tour was booked with Run The Jewels announced as openers and the hype was truly exceptional. Naturally, the 2020 Public Service Announcement tour has been postponed; however, Rage Against The Machine, likely in efforts to make something from what was supposed to be a massive year, have released The Battle Of Mexico City. The live album, recorded in 1999 as a part of their tour in support of their third record, The Battle Of Los Angeles, was originally released as a concert film in 2001.

Opening with the explosive “Testify”, the incredible live fury that was Rage Against The Machine is immediately apparent. With guitar legend and innovator Tom Morello, bassist Tim Commerford, and drummer Brad Wilk – easily among the tightest rhythm sections in rock – and vocalist Zack de la Rocha, the quartet deliver a massive wall of distorted and fuzzy fury, sounding easily like a band at least twice as large. This is further affirmed as the band blasts into “Guerrilla Radio” and the groove heavy, “People Of The Sun”.

Rage Against The Machine performed six of the 12 tracks on The Battle Of Los Angeles, including “No Shelter”, a single recorded around the same time, but only officially released on ‘98s Godzilla soundtrack. Busting out favourites from the album mentioned above and also including “Calm Like A Bomb” and “Sleep Now In The Fire”, the band features a heavy selection of hits from their first two records, such as “Bombtrack”, “Know Your Enemy” and the essentials, “Killing In The Name” and “Bulls On Parade”. The live album also features the unreleased “Zapata’s Blood” and comes to a climatic close with the one-two punch of an extended “Freedom” followed by “Township Rebellion”.

Titled after the final battle in the Mexican-American War (1846-1848), which saw the American acquisition of Texas and a large part of the current American Southwest (California, Nevada, Utah, New Mexico, most of Arizona and Colorado, and parts of Oklahoma, Kansas, and Wyoming), The Battle Of Mexico City is both recognition of a lesser-known history and a celebration among cultural minorities finding success within a constitutional system that is actively working against them. The reclaimed name of the famous war is matched purely by the visceral performance from the band. Truly, Rage Against The Machine were an incredible live band unlike any other and The Battle Of Mexico City is but a testament to the relentlessness and passion that brought their performance to life.

A passion for music has always been a part of Gerrod’s life. As a young boy, he was raised on a steady diet of the music from The Chili Peppers, Aerosmith, The Stones, Prince, and others from his mum. Raised in the GTA, Gerrod continued to foster his love for music by attending a wide range of concerts and learning the drums. His unapologetic passion for music has no bounds and has spread to a wide variety of styles, whether it be the 90’s rock that sound tracked his teenage years, the jazz he studied in university, or his newfound love for hip-hop. He recently received his bachelors in music and education from York University and is passionate about writing and reviewing good (and less than good) music. Gerrod is also the drummer and songwriter for a Toronto based rock & roll band, One In The Chamber.
RELATED ARTICLES
album reviewalbum reviewsrage against the machine
7.0

by Ljubinko Zivkovic on November 23, 2020
The War On Drugs Live Drugs Super High Quality Records When The War On Drugs released their rightfully acclaimed Lost In a Dream album back in 2014, they were confirmed as certainly [...]
8.0

by Ljubinko Zivkovic on November 20, 2020
JORDAN REYES SAND LIKE STARDUST American Dreams Records Ambient country might be a relatively new category for some, and it seems to be developing in popularity. After listening to [...]
8.0

by Nathan Pike on November 20, 2020
Dan Mangan Thief Arts & Crafts “I get sick of the same taste in my mouth and sometimes I need to sing someone else’s song to cleanse my palate.” A good cover song ought to sound as if the [...]
7.0