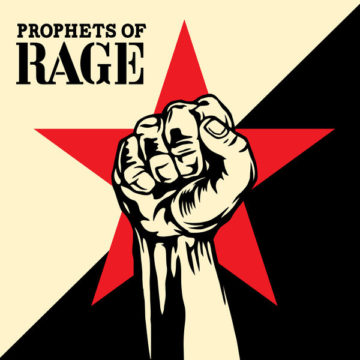 It’s 2017 and our neighbors down south are under the reign of what can only accurately be described as a tyrannical fool with an atrocious hair piece who only seems to benefit the upper elite and refuses to admonish the recent marching of neo nazis and white supremacists, and despite governing a country in crisis has an abundance of time to work on his back-swing.  Despite such turmoil, Rock & Roll -the typical outlet for political angst, since its earliest inception- has been relatively quiet on this front and even more so from most of today’s pop and hip-hop superstars. Enter Prophets Of Rage, the quasi-Rage Against The Machine reunion consisting of original RATM members, guitarist Tom Morello, bassist Tim Commerford, and drummer Brad Wilk. In place of original frontman Zack de la Rocha is B-Real of Cypress Hill and Chuck D of Public Enemy sharing lead vocals, as well as the addition of Public Enemy’s DJ Lord on the turntable. Originally reuniting for a 2016 tour- their Toronto show was not only truly spectacular, but it also featured a surprise appearance from Dave Grohl- and EP, The Party’s Over, Prophets Of Rage have returned with their self-tilted, full length record.

Prophets Of Rage is a bombastic and explosive collection of twelve songs that take aim at social injustice, oppression, and Trump; ultimately proving that this is the record we need most in a year where everything wrong with 2016 only seemed to get worse.

The album immediately kicks into high gear with “Radical Eyes” a dark and gritty banger that captures a number of strong and simple riffs from Morello and Commerford, along with a tight groove from Wilk. The addition of two frontmen allows for the group to capture two different vibes through their vocalists; Chuck D often sporting a bassy and classic hip-hop style that contrasts to the fast pace and at times melodic, nature of B-Real. This is an essential element to “Radical Eyes” and the rest of Prophets Of Rage.  There is a sense of balance and contrast between the two, but when together- as heard in the record’s lead single, “Unfuck The World”- the two sound as sturdy and strong as a stone wall. This is also what greatly separates this record from the work of Rage Against The Machine as much of Prophets Of Rage sounds as if it could have been an unearthed collaboration between Public Enemy and the rhythm section of Rage.  In many ways, Prophets Of Rage is a vintage hip-hop album, circa the late 1970’s and early 1980’s, as especially heard on the incredibly funky “Take Me Higher” and the defiant “Hail To The Chief”.  The strong rock influence from the band’s use of riffs and explosive solos, while highly reminiscent of Rage Against The Machine, feels modern and as revolutionary as it first did in 1992.

The record’s two lead singles, “Unfuck The World” and “Radical Eyes” are very strong and for lack of a better word, explosive. “Unfuck The World” features one of the record’s coolest guitar solos while also mixing sharp riffs with melodic passages and the simple message of unifying through music. It is, however, through the rest of the record that the band truly shines often through experimentation- stylistically and textureally.  The previously mentioned “ Take Me Higher” is not only inexplicably funky, but it also features Morello on a talk-box, giving his soloing and pedal board an even wider variety, while the dissonant harmonic scratches and loose groove of “Who Owns Who” makes for one of the strongest verses on the album. “Legalize Me”, B-Real’s plea for the decriminalization of marijuana stands out as the album’s most unique track as it is led by his heavily auto-tuned vocal melody and sounds as if Dr. Dre and Tupac had recruited Morello for “California Love” while “Living On The 110” sounds like it could have been a lost gem from an Audioslave session. Prophets Of Rage is very much a record that thrives by integrating an eclectic collection of influences in a way that is truly exciting and original.  While not to take away from the singles, I found that it was through the new territories explored in the albums deep cuts that a sense of danger- one as strong as the group’s message- was unearthed and resulted in one of the best hard rock records of the year.

Musically, Prophets Of Rage makes for an excellent full length debut marking a new chapter to the legacy of Rage Against The Machine, while also being a welcomed addition to said legacy. While certainly in the same vein as its predecessor, the debut record from Prophets Of Rage takes a stab at carving their own identity as Rock & Roll’s political enemy number one in today’s modern world by embracing numerous themes and experimental tones and styles, and does so quite successfully. While there is no doubt that Prophets Of Rage – the group and the album- are a direct offshoot of Rage Against The Machine, there is a certain feeling of emancipation from such that suggests that Prophets Of Rage will in fact be around for at least a few more albums.  If what’s to come is anything like their explosive debut, then we will most definitely be the better for it. This is a record that is as rooted in the legacy of Rage as much as it is in that of classic hip-hop, funk, and Hendrix that will leave fans eager to catch the band in a live setting. By tying so much together in a seamless and defiant manner, it is the equivalent of a sonic Molotov cocktail aimed at your speakers and the establishment, tossed with the intention to shake you up, to break the structure up. This is the hard hitting, hold no punches record we have been waiting for in the shadow of Trump’s America and you best believe that it delivers with an unequivocal fury.

A passion for music has always been a part of Gerrod’s life. As a young boy, he was raised on a steady diet of the music from The Chili Peppers, Aerosmith, The Stones, Prince, and others from his mum. Raised in the GTA, Gerrod continued to foster his love for music by attending a wide range of concerts and learning the drums. His unapologetic passion for music has no bounds and has spread to a wide variety of styles, whether it be the 90’s rock that sound tracked his teenage years, the jazz he studied in university, or his newfound love for hip-hop. He recently received his bachelors in music and education from York University and is passionate about writing and reviewing good (and less than good) music. Gerrod is also the drummer and songwriter for a Toronto based rock & roll band, One In The Chamber.
RELATED ARTICLES
album reviewsprophets of rageuniversal music
9.0