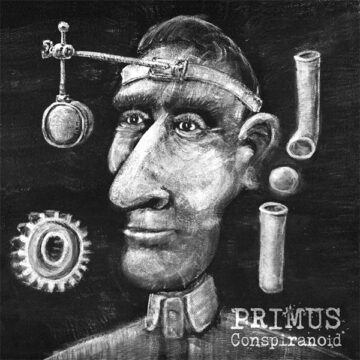 With no notice, Primus has returned with its first release in five years. The experimental, alternative rock icons have released Conspiranoid ahead of their upcoming tour. The three-track EP follows their previous album, 2017’s The Desaturating Seven, and sees the band reflect socially and politically on the past two years in a way that only Les Claypool could.

Opening with the eleven-minute title track, Primus ebb and flow effortlessly from progressive instrumentals to funk-fueled and rhythmic breakdowns, all under a psychedelic wash. If Pink Floyd and Tool got together for a jam, they’d be edging towards the resulting sound of “Conspiranoia”, a song that feels as inspired from Primus’ own 2014 reimaging of Willy Wonka & The Chocolate Factory. With a number of moving parts, this song alone is a musical marvel; a masterclass of composition and performance. “Conspiranoia” is progressive without feeling self-indulgent as the song grows organically, while remaining distinctly, and quirkily, that of Primus. With lyrics directly referencing multiple conspiracy theories, particularly ones that emerged throughout the pandemic – going the full length to sample audio from conspiracy theorists – Claypool demonstrates a lyrical reflection and political attitude as sharp as the band’s musicianship.

Ultimately, “Conspianoia” could have been released as a standalone single and would have been a highlight among Primus’ eclectic discography; however, the EP comes with an additional two tracks. The first, “Follow The Fool”, acts as a lyrical extension to the opening track, while introducing an alternative blues influence, with a simple bass riff, reminiscent of ZZ Top’s “La Grange”, before diving into an absolutely dirty shuffle of a chorus. “Erin On The Side Of Caution”, the EP’s closing track, is a hauntingly rhythmic and dissonant track that grooves hard – perhaps harder than it has a right to given its sinister tone. Without being heavy, the song feels abrasive and features a hard-hitting instrumental bridge section that feels nostalgic for old school Primus.

If Conspiranoid proves anything, it’s that Primus remains unlike any other band out there. Entirely unique, the trio’s latest record is an incredible display of unbridled musicianship and unconventionally sophisticated songwriting. As masters of their craft, Primus have delivered three exceptional and socially relevant tracks, making Conspiranoid a strong addition to the band’s catalogue.

A passion for music has always been a part of Gerrod’s life. As a young boy, he was raised on a steady diet of the music from The Chili Peppers, Aerosmith, The Stones, Prince, and others from his mum. Raised in the GTA, Gerrod continued to foster his love for music by attending a wide range of concerts and learning the drums. His unapologetic passion for music has no bounds and has spread to a wide variety of styles, whether it be the 90’s rock that sound tracked his teenage years, the jazz he studied in university, or his newfound love for hip-hop. He recently received his bachelors in music and education from York University and is passionate about writing and reviewing good (and less than good) music. Gerrod is also the drummer and songwriter for a Toronto based rock & roll band, One In The Chamber.
RELATED ARTICLES
album reviewalbum reviewsato records
8.0