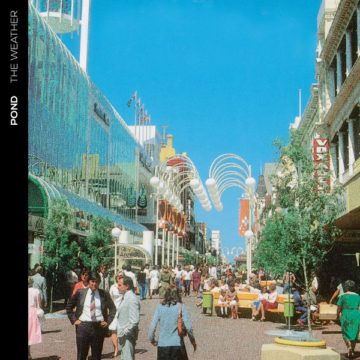 This is Pond, from Australia, led by Nick Allbrook.  Not the band from the ‘90’s who recorded for Sub Pop, this is a totally different band.  Joining Nick is Jay Watson, Joe Ryan and Jamie Terry.  Each member plays multiple instruments, but Nick Allbrook takes lead vocals for the most part.  The Weather is Pond’s seventh album, and the one that will break them internationally.  Allbrook, by the way, for a long while was fronting Pond, while playing in Tame Impala, but permanently left the band in 2013, which gave him more time to focus on Pond.

Pond is an excellent combination of ‘80’s music but with a psychedelic bent.  Through these two influences, the band forges their own distinct sound and create something very original.  Throughout their albums, they are striving for a sound, and with The Weather, I think they have achieved their desired goal.

It is a ten track album that weaves in and out of your consciousness while you listen to it.  Layered sounds, sound effects, and strong production link the songs together to form a cohesive and very strong album.  Using “Edge of the World” to bookend a series of songs, (the second one wounds like Pink Floyd, pre Dark SIde of The Moon), the band unleashes a series of songs with interesting radio play, ending the album with the title track, “The Weather”. A somber piece “Ghosts are negative space.  Ancestors, no blood.  No Place, no mark.  Just voices in the dark.”  sings  Allbrook in the song.  Overall, the theme of this album is loss.  Loss of self, loss of relationships, and loss of this planet.  Very heavy stuff, and with the layers of sound coming at the listener, it is difficult to ignore.  From the opening note of the album until the last chord, Pond holds the listener in their grip and does not let go,

For an album with such difficult and depressing themes, this is a major feat.  The secret for this band is that the songs all sound so different.  Sure, they all fall in the framework of the band, but there is a great deal of variety throughout the entire album.  At times the band rocks pretty hard (“ABCD”), other times it borders on disco (“Paint Me Silver”) and then they move into 80’s dub (“Colder Than Ice”), all the while maintaining their own sound and their own slant on the music.

All of this is tied together with interesting transitions where the listener is almost eavesdropping  conversations while a radio is being played.  These transitions also assist in holding your interest.

A brilliant album, maybe not all the songs work as they should, but as an album it holds together extremely well.

Born and raised in Whitby, Aaron discovered music through his love of The Beatles. This led to a career in radio, writing for various publications, and ultimately a radio show about The Beatles (Beatles Universe), which ran for over four years. When not immersed in music, Aaron enjoys spending time with the loves of his life -- his wife Andrea, and daughters Emily and Linda (all of whom have an intense love of music too).
RELATED ARTICLES
album reviews
7.0