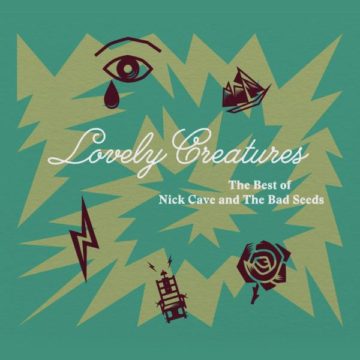 Compilations are a funny things.  When they are done well, they are like a new album in the artist’s catalog.  McCartney’s Wingspan , Erasure’s From Moscow to Mars, and Bowie’s Nothing Has Changed, come to mind,  to name just a few, are stellar examples of strong retrospectives.  .  You can add Nick Cave’s Lovely Creatures – The Best of 1984 – 2014 to this elite group.

The deluxe, triple CD set features 45 songs, plus a DVD of interviews, promo videos, and live performances.  For my money this is the treasure trove.  It is a lot of music, a lot of information, but it is all brilliant.  Fans of Cave and The Bad Seeds will not need any convincing, they may wonder why some songs are left off, and others included, but one cannot argue with the quality of the music.

Nor can one argue about the packaging and the presentation, stunning and well thought out. It is a beautiful package put together with a great deal of love and respect to the original material.

This set covers the first twenty years of this band and artist.  I am not going to comment on Cave’s unspeakable tragedy over the past few years, but rather the set that is available now. This is not a complete look at Nick Cave and The Bad Seeds, but it is a nice sampler and excellent beginning for the uninitiated.

The CDs are well organized and well presented.  The compilation does not replace his catalog, but it does serve as a companion to those albums and sits comfortably alongside the other albums.  A brilliant set

Born and raised in Whitby, Aaron discovered music through his love of The Beatles. This led to a career in radio, writing for various publications, and ultimately a radio show about The Beatles (Beatles Universe), which ran for over four years. When not immersed in music, Aaron enjoys spending time with the loves of his life -- his wife Andrea, and daughters Emily and Linda (all of whom have an intense love of music too).
RELATED ARTICLES
album reviewsmute recordsnick cave and the bad seeds
7.0