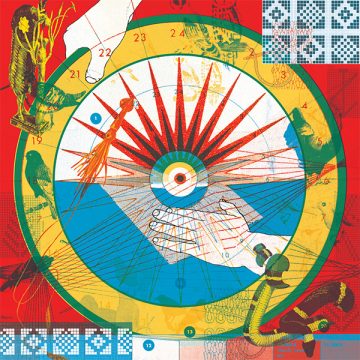 Hailing from Montreal, indie rock trio Plants and Animals has released their fifth studio album, The Jungle, an eight-track collection of songs that showcase the breadth of the band’s sonic abilities, and a willingness towards some experimentation that, despite its brevity, is a remarkably full, rich album of interesting, atmospheric electro-rock.

Opener and title-track “The Jungle” establishes a punchy beat from the start and seems to go a long while before the vocals come along, a simple “Yeah, yeah, yeah/yeah, yeah, yeah,” repeated like a mantra. Soon enough, other laser-like sounds pulse through the background, but it doesn’t stray far from the tones established up front. “Love That Boy” follows immediately, a song whose slightly off-kilter vibe is reminiscent of a Mac DeMarco Salad Days track, but with vocals by someone more like Spencer Krug (Wolf Parade, Handsome Furs), or a slightly subdued David Bowie. It’s especially touching that it happens to be addressed to his own teenage son, singing “There’s a world out there/Someday I want you to show me,” a father-son sentiment that adds emotional resonance as well.

“House on Fire” is the first single from the album, and deservedly so, as it is a track that is hard not to bob one’s head to. Inspired by concern for a friend’s over self-medicating and his own son’s climate change anxieties, the metaphor scales nicely from individual to global commentary on a world in which perhaps we’re all being boiled alive without noticing…and maybe we should do something about it. Despite that, it’s practically a thumping dance track, and the chorus “Your house is on fire/Your house is burning/Your home is on fire” is sung with the passion of someone screaming through a window, perhaps to wake the person asleep inside.

While all of the tracks gel as a collection, “Sacrifice” feels less reliant on the electronic embellishments of the previous tracks and is the most rock-oriented so far. The thumping drums and fuzzy guitar do most of the work until they are halted suddenly in a Beatle-esque change of rhythm where it seems as if the bottom drops out of one melody and is grafted on to a whole new one as they sing, “I’ve given you the best years of my life, babe/Volunteered on your behalf, girl/The sacrifice, it doesn’t matter” while the back up singers go “la, la, la, la, la” like kids with fingers in their ears.

There is a lot of variety here, and the discordant tones of “Love That Boy” or “In Your Eyes” towards the back end of the album are some of the strongest, most unique tracks, while others like “House on Fire” or “Sacrifice” show you the potentialities inherent within the band’s more upbeat side. Overall, this is a well-crafted album, and the way some of the tracks are strung together without pause pushes us to listen a little closer to the messages not only within each song, but to consider them all as a whole. In that way, one can see how personal and built from life this album is. There is a message here—to his son, to his friend, to all of us—to take some kind of action with our lives. The last line of the last track “Bold” sums it up nicely as he sings, “Okay, what’s next/The stage is set/Waiting for you to be more…bold,” before it is suddenly over and we are thrust into a ringing silence that is all the more poignant after so much rich sound, left with only our own lives to ponder.

Dan Kennard is an English teacher and fiction writer living outside Kansas City, Kansas where he lives with his wife and children. More about his work can be found at amazon.com/author/dankennard. You can also follow him on Twitter and Instagram @kennardistry or contact him at kennardistry@gmail.com.
RELATED ARTICLES
album reviewalbum reviewsplants and animals
8.0