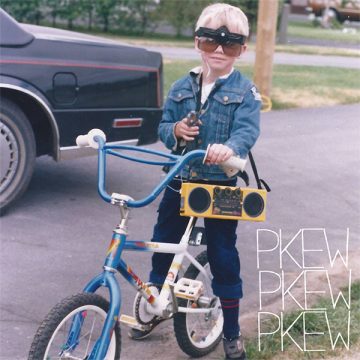 How many Pop-Punk musicians does it take to finish a two-four of beer?

ZZZZZZZZZ…..hmmmmm….what? Another Pop Punk band? You’re kidding me, right? Who still listens to that genre with all the lifeless, soulless Pop music choices you can get out there now? Not surprisingly, with the advent of the interwebs, lots of people still listen to this genre (sorry Gob and The Diodes) as Pkew Pkew Pkew brings it to the table and then some, with their working-class opus of the human condition.

This Southern Ontario group had its humble beginnings through a Craigslist ad and never looked back. Through their gang group vocals, Mike Warne (vocals, guitar), Ryan McKinley (guitar, vocals), Emmett O’Reilly (bass and vocals), and Dave Laino (drums and vocals) bring the “in-your-face” instrumental energy to a fevered pitch throughout this compilation. The album literally flies out of the gate and eviscerates your listening holes with the fantastic, upbeat, opening song “Blood Clot.” Its relentless heavy guitars aplenty and belting group vocals are a welcomed norm on this album. The heavy-guitar theme continues with the pleasant “Asshole Pandemic,” which is a great title commentary on the state of society. Humorous lyrics abound throughout the album; this is hit at its highest point in “Mid 20’s skateboarder” with the hilariously repeated line of “Mid 20’s skateboarder, I hope I don’t get hurt,” whist reliving prior glory days of youth Themes of partying with your friends and drinking beer are constantly faithfully revisited in the tracks “Hangin’ Out,” Let’s Order a Pizza,” Before We Go Out Drinking,” and “Drinking in the Park.”

If you’re looking for a collection of songs with a representation of intellectual braggadocio and depth, then you’re barking up the wrong tree with this album, and I think that’s the point. Sometimes bands can be mistaken for being profound if you deconstruct their lyrics long enough with the annoying, meticulous quill of a research professor (The Mars Volta, anyone?). Pkew Pkew Pkew gets down to the nitty gritty of yesteryears by unzipping their collective musical pants and letting their instrumental junk hang out for all to see and enjoy. What more could you ask for from a band? There are no secrets, hidden meanings or lofty lyrical ambitions from them. But with this in mind, it doesn’t make their intense album less enjoyable nonetheless.

This unrelenting, energetic collection can be seen as a throwback to a simpler time; their lyrics are blunt and to the point about just having a damn good time drinking beer with your friends. I can honestly see these tracks being drunkenly sung while out with your friends, or blasted at house parties. I’ll even go as far to say, you could hear these tracks while people are drunkenly dancing on the floor during a college / university pub night (À la “Home for a Rest” via Spirit of the West or “Closing Time” by Semisonic). This is how epic and culture-changing the songs on this album can be and hopefully the future will prove me right, as more Punkheads and audiophiles should enjoy what this band has to offer on a fun album. My only knock against this album? Its execution is only 21 minutes long, and that’s a damn shame. Here’s hoping for more from this quartet of southern Ontario lads and their untapped potential. Never has a band made the noble pastime of dicking around with drinking friends so intoxicating while not taking themselves too seriously. Grab this album and see what the fuss is all about. Salut!

Insert pretentious stuff about me here. I was born at a very young age. I am pretty, funny... without the comma. Easily distracte
RELATED ARTICLES
mid 20's skateboarderpkew pkew pkewroyal mountain records