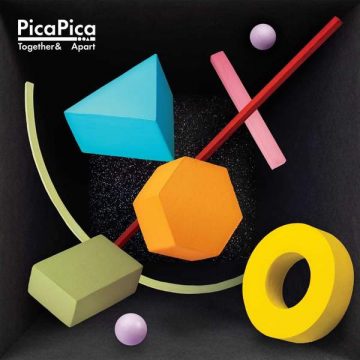 Have you ever wondered what Steeleye Span would have sounded like had Brian Eno produced them? Well, wonder no more. PicaPica’s new album, Together & Apart will answer that question for you.

Together & Apart, their debut, is a stellar album full of space and layers. There is a lot going on in the grooves of this album, and it is brilliant. The band blends their influences (The Beatles, folk, prog rock) into their own sound. Bands attempt this for years, PicaPica nail it on their first try.

Hailing from Scotland, the four-piece band is made up of Josienne Clarke (vocals), Samantha Whates (vocals), Adam Beattie (guitar, keyboards), and  Sonny Johns (bass). Johns also produced the album. Together they make a glorious sound that crosses genres easily and yet they have their own distinct sound. Initially, you might think this is a straightforward album, but it is not. There is so much more, much like The Roches at their peak, being produced by Robert Fripp.

The vocals and instrumentation blend to form wave after wave of beauty and intense emotion. This is an album about love, loss, self-doubt, life, and surviving disappointment. They also come up with some fine lyrics that take some unexpected turns. Listen to the brilliant “Cast In Stone” with the clever line, “You didn’t break me/I’ve never been strong”. Not what one expects but it completely works. Then “Sucker Punch”, a hard-hitting, angry, yet desperate song, that is lyrically and musically strong while maintaining a great deal of gentleness. “What can I ever do to be brave not weak”. A brutally honest lyric. “What did I ever do to be ignored by you?” they ask, set to sparse guitar. When the band kicks in, it does feel like a musical “Sucker Punch”.

Together & Apart ends as strongly as it begins with the beautiful “Stones”, that sums up the album beautifully and, quite frankly, leaves you wanting more. It comes to a logical and musical conclusion. In the end you have just listened to a cohesive, well-produced album. The instrumentation and vocals are flawless.

PicaPica is the Latin term for a magpie, symbolizing that this band is not afraid to admit they borrow from other artists, much like a magpie borrows from others to create a nest, something new. PicaPica have created something new, while having both feet firmly planted in the past and their musical roots.

Born and raised in Whitby, Aaron discovered music through his love of The Beatles. This led to a career in radio, writing for various publications, and ultimately a radio show about The Beatles (Beatles Universe), which ran for over four years. When not immersed in music, Aaron enjoys spending time with the loves of his life -- his wife Andrea, and daughters Emily and Linda (all of whom have an intense love of music too).
RELATED ARTICLES
album reviewalbum reviewsrough trade
8.0