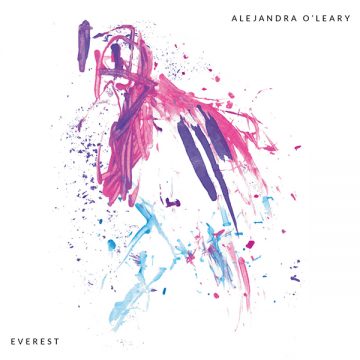 Have you been missing those twisted pop Throwing Muses albums from the  the Nineties? Well, while you wait for something new from them, you just might find the needed refuge in Everest, the latest album from Portland, Maine singer/songwriter Alejandra O’Leary.

Don’t expect one of those introspective Kristine Hersch solo albums, but the ‘true’ TM-style rocking, dream, pop albums from a girl whose voice can wander between Kristine Hersh and Tanya Donelly, who has obviously listened more to The Beatles or some power pop bands, than anything punk or new wave.

The half-Colombian, half-Irish artist combines all her influences, from the poppy intro of “Wires”, the Elvis Costello-styled “All Of This Time”, the Kristin Hersh-like “Ice Storms”, and mid-period Beatles of “Never Always Say Never”, into a quite charming pop rock melange. Part of the charm seems to lie in the fact that while preparing the album, O’Leary sent the demos of the songs she was preparing for Everest to hand-picked local musicians without any instructions. When they came to the studio, she gave them just one instruction – to improvise the final arrangement. Probably that is why the album has that rough at the edges, but still refined TM feel, without actually emulating Throwing Muses as such.

What we get at the end is an album that is at the same time refined pop with a rocky feel, something many musicians have forgotten or given up on these days.