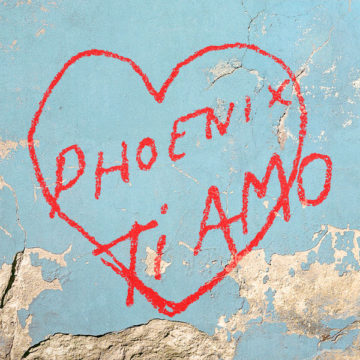 When this one hits the stores, I’ll be sitting back comfortably in my armchair waiting for the flak to start flying around by both critics and those who consider themselves Phoenix fans. I can tell you immediately, those who do, don’t know or don’t really understand Phoenix the band. You see, Ti Amo, the album Phoenix have been working on for the last three years or so, on its surface, sounds like just an homage to Italian disco! If you are unfamiliar with that sound at the height of its popularity in the late eighties and early nineties, just search out a video of the Italian singer/actress (if she is really either of those) Sabrina Salerno and her big European and elsewhere hit Boys (Summertime Love). After all, it was number one in France among other places. You’ll immediately know why Italian disco was big and why Sabrina had a hit – and it wasn’t for her singing.

This seems to have been Phoenix’s ploy all along. As anybody else, they’re tired of all the crap that’s flying around, both politically and economically. Similar kind of crap that was flying around when Italian disco was at its height. Remember, that is the times when things like the Gulf and Balkan wars started, among other things. Is it any better today, and what do you do? As a musician, you can protest like everybody else, turn away in resignation, or you can laugh in the face of trouble. If so, why not with something like Italian disco?

Then again, if you really want to do that, you first have to get the moves and the grooves of a certain sound down pat, and then try to add the elements of something else and stretch and play with the boundaries of a certain sound. On Ti Amo, Phoenix do all that and come up with a fantastic winner. Not only does the band go to the roots of certain sound – Italian Disco was built on sounds of early eighties British synth bands, particularly second phase Human League – but as they have done on all their previous albums, Phoenix add all these music elements that really shouldn’t be there (shouldn’t they?).

Let’s take a closer look: the opener “J-Boy” is adding Big Star melody structures over the typical Italo disco interpretation of the Human League, while the title track adds some Prince variations headed for California. Italo Disco style, of course. And you can definitely dance to both. “Tuttifrutti” has arrived on the West Coast, and updates the sound of guys like Ned Doheny and Seventies California soul variations. “Fior Di Latte”, one of the few songs that has Italian lyrics, slows the sound down, but hits all the elements perfectly in their place. The sound of “Lovelife” can serve as a characterisation of the whole album – Phoenix are not mimicking a sound but are coming up with perfect melodies, vocals and instrumentation. Absolutely nothing to be faulted.

And that is only half of the album. And it reads like a mini encyclopedia of modern music – you’ve got traces of Beach Boys (but we’ve had that with Phoenix before), Pulp (Crocker himself a big fan of modern French sounds), The Fall, to mention a few. The two closers, “Via Veneto” and “Telefono” are a treat themselves. They sound like something that would be playing in the hotel bars on one of the most elegant streets in Rome (Via Veneto, of course) on a sunny day while you sip your ristretto and guys who are coming in the same clothing they wore yesterday are turned away to go home and change first.

How else would you like to spend time in face of all the trouble around you? A perfect release, whether you’re a fan of anything connected with the word disco or not. I’m not.

Formerly a lot of things, including a journalist and a translator, currently a freelance writer living in The Netherlands.
RELATED ARTICLES
album reviewsglassnote recordsj-boy
9.0