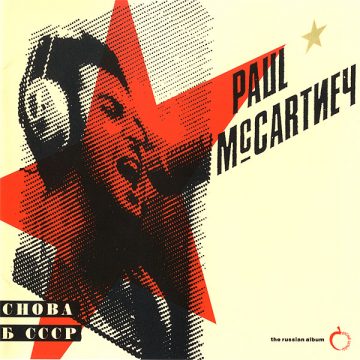 Paul McCartney continues his re-release projects with four of his live albums. Choba B CCCP, is not so much live album as it is a ‘live in the studio’ recording. It is also one of the more unusual albums in McCartney’s catalogue.

It is a great album with a fascinating history. It was originally released in October 1988, only in the Soviet Union. The title translates to Back In The USSR Again. It was never intended to be released in any other country. It was also distributed to members of Wings Fun Club.

Choba B CCCP also garnered McCartney some of his best reviews in many years and it  was finally released in North America in 1991 on CD and cassette. This re-release marks the first time it has been available on vinyl outside of Russia. This version replicates the original 11-track album, as opposed to the 14-track CD.

Choba B CCCP was recorded over two days, live in the studio, in July 1987 with two different sets of musicians.  McCartney decided to cover old rock ‘n’ roll favourites, something he had never done before. He is very comfortable performing these oldies, and the entire album is an absolute treat. Every song is performed with live energy, and McCartney’s voice never sounded better. His take on “Don’t Get Around Much Anymore” and “Crackin’ Up”  are worth the price of admission alone, but then there is blistering “Lawdy Miss Clawdy” and “Just Because”. Not a weak song to be found.

Choba B CCCP, is a unique album for McCartney. He recorded it live off the floor and it is good old fashioned rock and roll. Although it is great to have this album re-released, it is surprising that this was chosen instead of  his wonderful (and quite popular) Unplugged album. McCartney was the first artist to release an Unplugged album and remains the only artist to be 100% acoustic. But then, sometimes The Beatles and McCartney’s re-release projects do not make total sense.

Regardless of the reasoning, it is so good having Choba B CCCP back, and on vinyl (colour vinyl if you are lucky). This is McCartney at his rock ‘n’ roll best and quite frankly one of the best oldies cover albums ever recorded.

Born and raised in Whitby, Aaron discovered music through his love of The Beatles. This led to a career in radio, writing for various publications, and ultimately a radio show about The Beatles (Beatles Universe), which ran for over four years. When not immersed in music, Aaron enjoys spending time with the loves of his life -- his wife Andrea, and daughters Emily and Linda (all of whom have an intense love of music too).
RELATED ARTICLES
album reviewalbum reviewsbring it on home to me
10