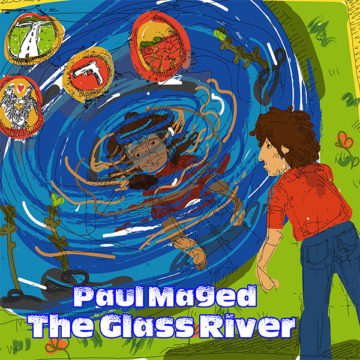 It won’t take long for listeners to pick out all of the ingredients in Paul Maged’s latest album, The Glass River. There’s a little bit of Queen, a little bit of Nick Cave, a little bit of Father John Misty, and a lot of Meat Loaf and Weird Al on each of the tracks. While this makes Maded’s sound familiar his compositions and opinions are his own, for better or for worse. His songs are comical whether or not he intended them to be and his messages are blunt. However, while most of the songs on this release are entertaining, the nature of the music and lack of poetic prowess hurts its message. Paul Maged’s The Glass River is the soundtrack to a missed free throw; he knew exactly where he wanted to put the ball but still missed his mark.

The Glass River sounds like a classic rock opera. Piano and electric guitar drive each track and compliment Maged’s voice well while it sits comfortably over the rest of the mix. The timbre of Maged’s vocals is very listenable. His sound is an amalgamation of Gerard Way, Randy Newman, and Stewie Griffin, with some classical training. His range is impressive and his use of vibrato keeps his performances interesting. His compositions on the other hand are not nearly as interesting. His songs end up exactly where you expect them to, straddling the line which separates classic and hackneyed.

Maged’s lyrics on The Glass River are incredibly straightforward and the songs suffer because of it. His songs sound like a debate with no one; he preaches to the listener so unabashedly that it is easy to question if Maged is the one being unreasonable. “Corporate Hell (The Legend of Tooly McDouche)” is a clear example of this problem.  Just the nickname Tooly McDouche, which the song’s narrator and his co-workers ascribe to their boss in secret, is immature enough that it makes the listener question if they are getting both sides of the story. It is hard to believe a song based off childish name-calling could be written by the righteous, and thus, the song struggles to inspire empathy. “Gunz 4 Hire,” on the other hand deals with such a serious issue in such a childish manner that the song just might ruin the entire album. Maged speaks to his own agenda on gun control throughout the song with his signature over dramatic style. It’s silly and whether the listener enjoys it will most likely depend on if they stand with Maged on the topic. However, when Maged goes on to list multiple shootings in the song the vibe changes from cheeky and satirical to plainly gross. Sure, humour is tragedy plus time and confined art is no art at all, but the song is not an epic comedy and does not communicate the best points in an anti-gun stance to begin with. This song plays like a bombing comedian who says something incendiary in an attempt to turn his act around only to get booed off stage.

Maged’s future in music depends on where he goes from here. He is the kind of musician that you go see live to see what cover songs he may perform.  With more comprehensive lyrics and sever dynamics his next album could be something incredible. However, The Glass River settles on being interesting at its best and obnoxious at its worst.

The Spill Magazine is a Toronto-based online publication dedicated to covering the independent music scene with a strong focus on our thriving hometown talent. Our writers bring you up-to-date news, in-depth features on musicians and reviews for the latest CD releases. We also travel to the front lines for all local festivals including Canadian Music Week and North by Northeast. Don’t forget to check out our Facebook and Twitter pages for all daily Spill updates.
RELATED ARTICLES
album reviewslight years awaypaul maged
8.0