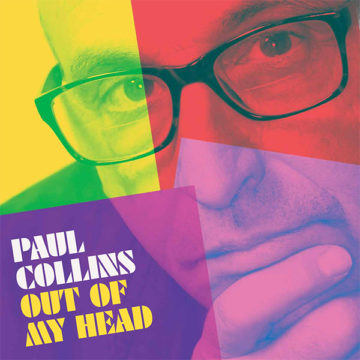 Paul Collins
Out Of My Head
Alive Naturalsound Records

From the opening power chord, to the last perfect harmony, this album was an extreme listening pleasure. It is brilliant and a welcome return of Paul Collins. It has been four years since we have heard anything from Collins, and that album was credited to The Paul Collins Beat (Feel The Noise). For Out Of My Head, he is known simply as Paul Collins and it is clearly his album. He plays drums, guitars, and of course, sings. He is joined by Paul Stingo on bass and backing vocals and together they form the perfect sound.

Of course Collins is best known as the pioneer and godfather of power pop, and on Out Of My Head, he firmly establishes this position and more. He is really untouchable when it comes to this genre of pop. He knows when to bring in the backing vocals, the harmonies, and everything else. The man is a master at arranging. He creates a sound that is familiar and brand new. He also creates music that has you craving more.

There is not a weak track on this album, and the man knows how to write a melody that evokes a great deal of emotion. Take a listen to “Lost Again”, the melody and the lyrics come together to fit the perfect power pop ballad, and if it does not choke you up, well I don’t know what will.

Collins is a master songwriter. Since his debut with his band The Beat in 1979 (no, not The English Beat) he has perfected his skill in writing, and there are a number of bands and artists who would not be here were it not for Mr. Collins. He developed this style, which so many artists have attempted, and here on Out Of My Head the master shows how it is done.

Collins has crafted a near perfect album. It is full of incredible melodies, perfect arrangements and great short snippets of life. The album ends with the incredible “Beautiful Eyes”, a song that encapsulates the album, on one hand it sounds intensely personal, but rather than being uncomfortable with the sentiment, the listener identifies and the song becomes something for everyone and one for the ages. This is not an easy thing to do for an artist. But this speaks to the genius that is Paul Collins.

Born and raised in Whitby, Aaron discovered music through his love of The Beatles. This led to a career in radio, writing for various publications, and ultimately a radio show about The Beatles (Beatles Universe), which ran for over four years. When not immersed in music, Aaron enjoys spending time with the loves of his life -- his wife Andrea, and daughters Emily and Linda (all of whom have an intense love of music too).
RELATED ARTICLES
album reviewalbum reviewsalive naturalsound records
9.0