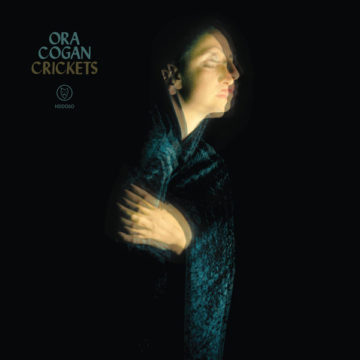 Crickets is Ora Cogan’s fifth album, and it is her best. Last year she released the remarkable Shadowland, and to me it was somewhat doubtful she would be able to top such a personal and beautiful album. The fact is she has. Crickets is brilliant from beginning to end. Cogan has created an album that envelops the listener and draws them into her own world. Not unlike Cocteau Twins, but musically very different.

The album was recorded in Philadelphia, and co-produced by Tom Deis (Uni Ika Ai) and she is accompanied by Uni Ika Ai member Maia Friedman (background vocals), percussionist Dani Markham (TuneYards, Childish Gambino) and violinist Russel Kotcher (Chamber Orchestra of New York). Canada’s own Cogan (she is based in Vancouver) does the rest. Collectively, this group produces a sound that is entirely their own, yet accessible.

Although, there is a consistent flow to the album, Cogan takes the listener through many different styles and sounds. Twangy guitars meet ambient music, layered vocals meet a driving beat, and yet the sounds all make sense. In fact, this is an album best enjoyed in its entirety. Sure, some of the songs work on their own (“Moonbeams’ comes to mind), but the album holds together as a whole.

It is hard to categorize. Again, not that she sounds like the Cocteau Twins, but in the same manner of trying to slot them into a format is near impossible, the same is true for Cogan. She seems more concerned with sound, texture and feeling than fitting into a category. As a result Cogan creates her own genre, very melodic ambient, rock.

The album is extremely well produced and well put together. It is a strong piece of work. Easy to listen to and easy to lose yourself in with the sounds. Cogan and Deis have a solid understanding of combining sounds to create art. Multiple layers, multiple directions, it really is quite an accomplishment.

It is obvious that over the past few years Cogan has developed into an artist. One of the things she realized is to pick players who are not only sympathetic to her sound but have a solid understanding of what she wants to accomplish. With Crickets she has teamed up with a brilliant choice for producer. Together they have assembled the band she requires and the end result is a beautiful album.

Born and raised in Whitby, Aaron discovered music through his love of The Beatles. This led to a career in radio, writing for various publications, and ultimately a radio show about The Beatles (Beatles Universe), which ran for over four years. When not immersed in music, Aaron enjoys spending time with the loves of his life -- his wife Andrea, and daughters Emily and Linda (all of whom have an intense love of music too).
RELATED ARTICLES
album reviewscricketshand drawn dracula
8.0