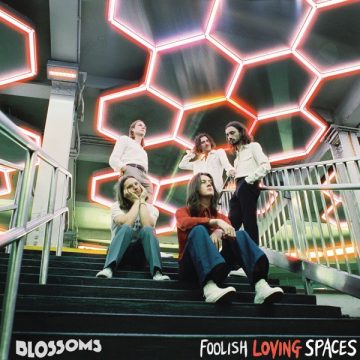 Blossoms are a young British guitar-based band hailing from Manchester who have already a number one album in the UK tucked into their back pocket. They have a serious desire to take the interest they are generating in North America and turn it into record sales, with much attention being given to this highly-anticipated third album release.

The label describes them as Indie. Although they were originally, they are now a far more pop-based band, airwave friendly and highly commercial. There is nothing wrong with that. I like the fact that they write their own material, and the sound reminds me of Duran Duran and early eighties British new wave pop.

“The Keeper”, which is the single, sees the band making a real US link in the video set in New York. It typifies the energy and popular appeal of the strong sense of melody within their music, this appeal is there in the positive mood of their whole album – especially in “You Think this is Real Life” or “Your Girlfriend”. Musically, I enjoyed the drumming of Joe Donovan, it’s low in the mix but he drives the band live and holds the beat on the album.

This is a band getting a lot of (deserved) attention, and as they turn toward the US I do wish them well. Catchy songs and youthful energy will get them the YouTube hits, and they are selling out shows seemingly with ease. There are other young British bands I like more such as The Marmozets and Black Honey, but I’d be the first to admit, none of them have the sheer commercial appeal of Blossoms.

I liked the album. It will get airplay and keep their fanbase growing. It’s slick, commercial and destined for success.

The Spill Magazine is a Toronto-based online publication dedicated to covering the independent music scene with a strong focus on our thriving hometown talent. Our writers bring you up-to-date news, in-depth features on musicians and reviews for the latest CD releases. We also travel to the front lines for all local festivals including Canadian Music Week and North by Northeast.Don’t forget to check out our Facebook and Twitter pages for all daily Spill updates.
RELATED ARTICLES
album reviewalbum reviewsblossoms
9.0