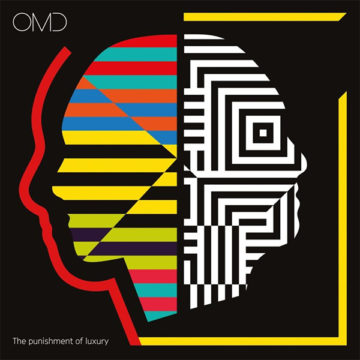 Orchestral Manoeuvres In the Dark (OMD) are not a retro act. This band may have started close to forty years ago, but they continue to produce relevant, interesting and innovative records. Not many artists can make that claim, but OMD can.

The Punishment of Luxury is their 13th studio album, and their first since 2013’s incredible English Electric. Since then, they have released a couple of live albums, while interesting and well played, made fans long for new studio recordings. And here it is, the new album from Andy McCluskey, Paul Humphreys, Martin Cooper and latest recruit, Stuart Kershaw (filling in for original drummer Malcolm Holmes).

From the very beginning, OMD have been fascinated with man’s relationship with technology and the isolation it can bring. Here they focus on the fact that while the western world has everything at their fingertips (literally), there is still a distinct unhappiness in the world. OMD also struggle with the need for war and violence, again, when we are to be sophisticated and have the ability to deal with issues in a more diplomatic way.

“The punishment of luxury, Is in the air for all to see. And it’s ugly now, And getting worse everyday,” McClusky sings in the title track. Being the first song on the album it sets the tone. He and OMD do not pull their punches, the listener gets the message throughout the album.

Again, OMD do not simply write songs, they construct music with use of sound and images. Listen to “La Mitrailleuse”, and the use of guns for a rhythm structure. Intriguing and remarkably disturbing. Their use of sound is staggering. Much like their earlier albums, OMD are continually looking for sounds to incorporate into their music. Adventurous and pleasing at the same time.

What has always been fascinating about OMD is their ability to layer fantastic melodies over their sounds. Here again, throughout the album, OMD come up with melodies that get stuck in your head and demand relistening. This is quite a feat, given both the subject matter and the manner in which they choose to layer sounds.

I started this review by stating OMD are not a revival band, and they are not. The Punishment of Luxury is yet another example of this band pushing the envelope that much further. After all these years, and a back catalog of brilliant material, this is a band that could spend their days on the ‘retro’ tours. But these guys have never taken the easy way. They continue to produce their incredible material and continue to grow.

The Punishment of Luxury is simply one of the best albums of the year and an album that will no doubt influence younger bands. OMD have always been influential and this will continue with the release of this album. And once again, this band breaks new ground. Quite an accomplishment.

Born and raised in Whitby, Aaron discovered music through his love of The Beatles. This led to a career in radio, writing for various publications, and ultimately a radio show about The Beatles (Beatles Universe), which ran for over four years. When not immersed in music, Aaron enjoys spending time with the loves of his life -- his wife Andrea, and daughters Emily and Linda (all of whom have an intense love of music too).
RELATED ARTICLES
album reviewsandy mccluskeyla mitrailleuse
8.0