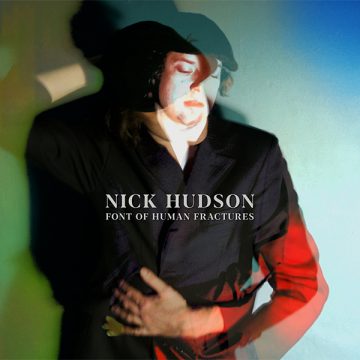 Modern music genres can really be strange constructs. They can be proclaimed on the basis of musical structures, lyrics or just simply the mood they create. Very often though, they overlap, and you can actually lump a certain album or a release into two or even more such genres. That can certainly be the case when we talk about Font of Human Fractures, the latest album by British artist Nick Hudson.

Hudson has been around for a while and has a slew of releases under his own name or as a member/leader of The Academy of Sun. You can add to the list his collaborations with the likes of Wayne Hussey and David Tibet (Current 93) and GB Jones.

Just looking at brief list (it is quite longer, actually), you get the indication where many would file Hudson’s music genre-wise. Of course, the first thing that would come to mind would be some form of gothic rock. But for his latest release, the key term just might be that “some form”. Sure, five years after his latest solo release Hudson keeps those dark overtones that are so often associated with gothic, but he is stylistically trying to explore some new territories while still holding to what he was previously known for. Hudson scored most of the album just for a piano two violins and his quite effective vocals, adding electronic touches here and there.

And while this might sound like a very sparse musical palette, Hudson is able to give his music an expansive sound while thematically staying within his dark, brooding themes.

Formerly a lot of things, including a journalist and a translator, currently a freelance writer living in The Netherlands.
RELATED ARTICLES
album reviewalbum reviewsfont of human fractures
7.0