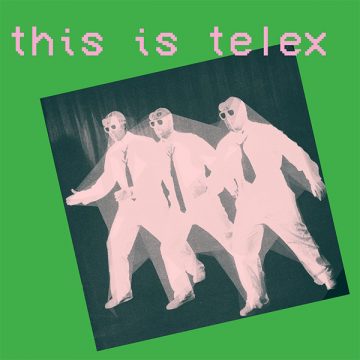 Telex
This Is Telex
Mute Records

The partnership of Belgian synth-pop pioneers Telex with Mute Records to re-issue the band’s back catalogue is a logical fit, and it launches with career retrospective This Is Telex. Rather than assimilating them into some larger narrative, the chronological tracklisting of singles bookended by two unreleased songs serves to isolate the band historically. The compilation thus feels encyclopedic, and appropriately so, given their contrarian aesthetic.

Telex’s first single, a cover of the Les Chats Sauvages song “Twist à Saint-Tropez,” is notable for its blues chord progression and future Howard Jones bass line. “Moskow Diskow” is a good example of their skittering, frenetic early work, which seems to use every vocoder, arpeggiator, and filter effect their synthesizers were capable of producing under the influence of Kraftwerk and disco. There’s something charming in the way singer Michel Moers intones “ER-oh-VEEZ-yon” on “Euro-vision,” Telex’s 1980 entry for Belgium for the contest of the same name.

In the early 1980s, outside of Europe only dance club hipsters would have been aware of Telex because of the language barrier. For their third album, they collaborated with quirky American art pop duo Sparks as much for their facility with English as for their more accessible songwriting. This resulted in the funky “Drama Drama,” which made liberal use of stabbing synth squiggles before it was popularized by Prince and the Dazz Band. Featuring lyrics bemoaning quotidian obligations like “Gotta get up, coffee in cup/Medium toast, time to blow nose/Shower and shave, my name is Dave,” etc., the track does not, however, feature David Bowie or my line, “Sounds just like ‘Fame,’ exactly the same!” Sparks also co-wrote the track “Exercise Is Good for You,” which might be good for you, but was not good for Telex.

Telex’s booming, bass-heavy cover of Sparks single “The Number One Song in Heaven” surprises for its poignancy and restraint, as does their previously unreleased Beatles cover, “Dear Prudence.” The mellowed irony in these late-career tracks represents the endpoint of Telex’s unique contribution to pop music just before the death of band member Marc Moulin in 2008.

Charles T. Stokes is a nonprofit resource development coordinator and donor researcher based in Denver, USA. He’s also a tennis player and writer looking to make a racket with his own noises. “There are places in the world where one cannot publicly listen to or perform whatever music they choose without fear of harassment or prosecution. The freedom to write about new music is power, a privilege.”
RELATED ARTICLES
album reviewalbum reviewsmute records
8.0