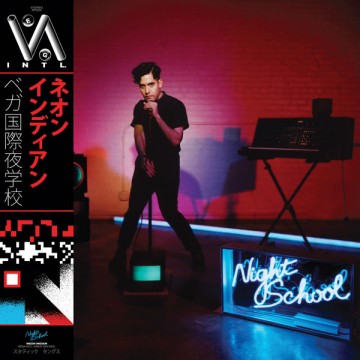 Neon Indian (Alan Palomo) is a man out of time, out of place. In 2015, Palomo remains an anomaly forced to the fringe of success despite pumping out resplendent records like VEGA INTL. Night School, an assemblage of tracks that gathers Giorgio Moroder, Prince, Scritti Politti, dancehall-era Blondie, and maybe even The Police and Depeche Mode for a barroom brawl of contrasting styles and personalities. ‘80s nostalgia most often takes on the veneer of kitsch, as if the decade can’t be admired without a sense of irony. Neon Indian dispels this notion by celebrating the 1980’s artificial soundscape with liberal sampling, pitch shifting, thumping bass and synths, synths, and more synths – my god, he said with a hushed whisper, the synths.

This 51-minute double album (as it’s billed) treats us to a more adult, more risqué Neon Indian than past efforts (the last of which dropped four years ago) even if the veneer of happy fun times clouds the message somewhat. If the Night School moniker is any indication of Palomo’s intentions, the album dutifully follows this thematic assertion. “Smut!” details a ménage à trois in a Chinatown brothel. “Baby’s Eyes” opens with a bit of synth that recalls John Carpenter’s score for Halloween and follows, not coincidentally, someone with murderous intent. In a recent interview Palomo called this album “a screwball comedy about nighttime New York.” And it’s easy to imagine one wild night circa 1984, with Palomo wandering the city streets, euphoric, optimistic, and tripping on cocaine. But of course this wasn’t Palomo’s scene. This is the music he grew up with. The music that embedded in his ear and now spews forth, filtered through 30 years of distance.

The first single from the record, “Annie,” is certified groovy, and, if you’ve listened to indie-oriented radio (XMU or some such) over the last month, an omnipresent staple of DJs everywhere. It might not be the best track on this release, but it’s the most immediately accessible. A head-nodder that gathers your attention and drags you into the slums of Palomo’s mind, hungry for your next fix.

In many ways, VEGA INTL. Night School might be considered too cozy because of these familiarities, but it’s far from a “safe” record. Palomo has less regurgitated than orchestrated a symphony of a million players. There’s almost no end to the layers of sampling, homage, and invention. This might be the soundtrack to the mid ‘80s – when the twilight of genres like post-punk, disco, and funk blended into the invention of modern popular music – or it might just be the ideal soundtrack to the mid 2010s where nobody can quite figure out where the immediate winds of artistic change will take us. Therefore, why not go everywhere at once?

James David Patrick has a B.A. in film studies from Emory University, an M.F.A in Creative Writing from the University of Southern Maine, and an honorary Ph.D. in bullshitting about everything else from the College of Two Pints. His fiction and non-fiction has appeared in PANK, Monkeybicycle, Squalorly, Specter Lit, and Bartleby Snopes among other wordy magazines. While he does not like to brag (much), he has interviewed Tom Hanks and is pretty sure you haven't. He bl-gs about music, movies, and nostalgia at thirtyhertzrumble.com and runs the James Bond Social Media Project at thejamesbondsocialmediaproject.com. James lives in Pittsburgh, PA.
RELATED ARTICLES
alan palomoalbum reviewsmom + pop music

by Andrew Wu on November 21, 2019
NEON INDIAN @ VELVET UNDERGROUND, TORONTO NOVEMBER 21, 2019 It was a rainy night in Toronto, but that didn’t stop fans from packing the house to watch electronic band Neon [...]