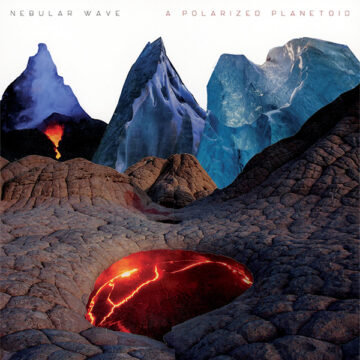 Nebular Wave, the psychedelic prog-synth rock band from Edmonton, AB, has released their third album, A Polarized Planetoid, and at six instrumental tracks total, four of which go over the eight-mins mark, it is a true multi-dimensional space-out album.

Opening track, “The Tytler Cycle” (a reference to Alexander Tytler’s theory that democracies only last about 200 years), gives some interpretive direction to the album, building layers of sound that synergize and collapse over the course of it, highlighted by well-timed jolts of fairly epic guitar riffs and bouncing synth. “Will to Sour” follows but the mood has shifted, at least at the outset. Drums begin a groovy, hypnotic thumping, but soon other sounds arrive, pile up: the tapping of cymbals, the noir slithering of guitar—like Dire Straits on acid—the electronic cycling, looping, gaining energy until it begins to wobble, only to restart again in new form, the movement of metamorphosis.

“An Ostentatious Display of Virtue” is the shortest track here, feels like watching the doors of a spaceship open on a newly discovered planet for almost three minutes, wondrous and reverent. “Tinfoil Stetson” features some big, shredding guitar solos reminiscent of Trans-Siberian Orchestra, and on the back end of the album, “Propaganda Supernova,” darkens the atmosphere again and simmers along moodily before closing out with the longest track, “Three Sheets To The Solar Wind,” which comes in at nearly ten minutes and opens with a bass-heavy, droning swirl accented by towering, heavy riffs of guitar near the end of the album.

In the end, Nebular Wave is both the name of the band and an apt description of the listening experience—spacey, dystopian—frantic at times, tranquil at others, enigmatic, yet precise, rising and cresting and collapsing in any given moment as the sound morphs and evolves over 40+ minutes. Enjoy the ride, I say.

Dan Kennard is an English teacher and fiction writer living outside Kansas City, Kansas where he lives with his wife and children. More about his work can be found at amazon.com/author/dankennard. You can also follow him on Twitter and Instagram @kennardistry or contact him at [email protected]
RELATED ARTICLES
album reviewalbum reviewsnebular wavE
8.0