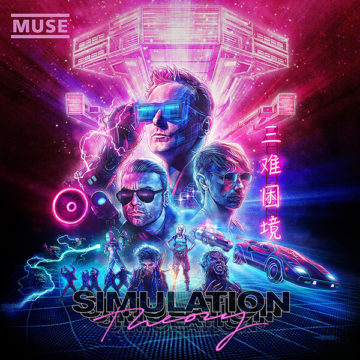 With an infamous distaste towards the notion of stylistic continuity across a career that has seen the band go from the depths of classically-inspired progressive metal to pop-fueled electronica and everything in between, it should come as no surprise that Muse’s newest release marks yet another drastic change of direction. Following the relatively stripped-back 2015 release Drones (being so only by the standards of a band whose bombast and heavy-handedness define their sound), Simulation Theory sees the band delve into all the technological and sonic indulgences they’d resisted on their previous album.

Immersed in a retro-futuristic aesthetic rooted in the ‘80s sci-fi movies of their childhood, Matthew Bellamy, Chris Wolstenholme and Dominic Howard deliver what may be their most thematically and musically consistent release to date. Not only do all the tracks share a common sound, there’s a far greater musical resemblance to the melodies and progressions of early albums Showbiz and Origin of Symmetry than anything Muse have released in the last decade. It demonstrates a degree of self-connectedness and genuine inspiration that has been largely lacking in that time.

From the broad, cinematic landscape painted by opener ‘Algorithm’ to the grungey and Rage Against the Machine-inspired ‘Break It To Me’, the prog-rockers’ eighth album to date seems immersed in its own world across varied and distinctive tracks that are as effective on their own as they are together. Paired with a learned craftmanship behind the production boards and programming in the studio, Simulation Theory is certainly a return to form in the sonic sense. It’s a welcome change from the trite songwriting that compromised musicality for heavy-handed political concepts on their last release.

That’s not to say that Muse have abandoned their recent tendency towards political rallying cries and over-the-top, shameless musical referencing for poetic subtlety and avant-garde experimentation. The thematic content, which is largely derivative of the philosophical inspirations behind the Matrix, is delivered with the delicacy of a hammer wielding toddler, going through all the clichéd lyrical tendencies that are so characteristic of the band. However, the honesty and earnestness of this plainspoken expression and the messages that underlie it alongside a more genuinely engaging musicality make Simulation Theory’ relatively easy to swallow.

While tracks like ‘Propaganda’ and ‘Get Up and Fight’ might stray too far into the world of poppy R&B for long time admirers of the band, the album largely integrates those influences seamlessly across a body of well-written tracks. The resulting minimalist modern beats and thick synths yield several songs that can stand up alongside any other in their discography, with ‘The Dark Side’ deserving special praise in this regard. It’s not enough to completely justify the more-than-occasional cheesiness that permeates the record, but it certainly is a successful and enjoyable effort from a band whose creative longevity had come under scrutiny in recent times.

Based in Montreal but raised across Western Europe, Andrew feels at home both everywhere and nowhere. Having picked up the piano at age four, he has since gone on to add clarinet, saxophone and guitar to his musical arsenal. As well as crafting music, Andrew spends a lot of time listening both at home and in live contexts. Rather than focusing on a particular style or calibre of artist, he is keen to explore music of any shape or size. Outside music, Andrew's passions lie in philosophical writing, visual art and sharing positivity with the world around him.
RELATED ARTICLES
album reviewalbum reviewsmuse
9.0