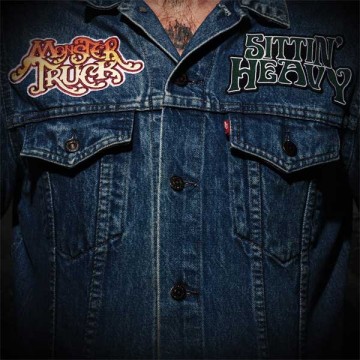 Why are you not rocking? Well you probably haven’t heard of Monster Truck.

The up-and-coming Canadian rock ‘n’ roll powerhouse is back with a bang! Sittin’ Heavy is Monster Truck’s second studio album after the success of Furiosity, which won them a Juno for Breakthrough group of the Year in 2013 and they’ve been blazing through the music scene ever since. If you’re a Torontonian you may have heard  “Sweet Mountain River” or “Seven Seas Blues” bumping on 102.1 The Edge in every other vehicle around the GTA after that first album’s release.  This second album has been climbing the charts internationally pumping some great white northern rock ‘n’ roll through the universal airwaves.

The first song on the LP is a great choice to start off the album, titled “Why Are You Not Rocking?,” an appropriate name that doesn’t stay appropriate for long. A faint voice says “alright good to go…” then snares and percussion come blasting in, setting the feel and pace for the song. A grainy guitar riff follows close behind. This smooth and heavy combination will inevitably make you wanna rock. The ruggedly dynamic vocals of Jon Harvey come in strong, which really aids and defines the mojo that is Monster Truck. All this comes together with a chorus that states, “rock ‘n’ roll might save your life, it might save your life tonight!” And you know what, it just might be true. Given the opportunity to see them at least twice live they definitely know how to put on an entertaining show.  Not a person in the crowd wasn’t at least bobbing their head along uncontrollably. Track two, “Dont Tell Me How To Live” immediately sets itself as another rock classic with rebellious lyrics combined with heavy chugs and distorted palm mutes booming through the amplifiers. The vocals switch from belting out bold lyrics to harmonizing with the guitar of Jeremy Widerman. And what’s a little rock ‘n’ roll without some classic wailing guitar solos (of which there are plenty of on this album) that make your eyebrows wince as you air guitar along? But wait! How long could they keep this head banging parade up? With yet another track “She’s a Witch,” a piece with a polychromatic blues riff complemented by the lower lead-footed vocals with a sprinkle of keys. The lyrics “ that girl’s got a demon in her soul” is backed up by hymns repeating the same line which give the recurrent verse that extra little punch of a well produced single. “For the People” has more of a southern rock sound that promotes the band as a group of people pushing positivity. The four-and-a-half-minute heavy hoe-down immediately paints a picture of trucks, beer, denim, boots and getting grimy.

“Black Forest” is the first song that changes the overall mood of the album. It starts with the sounds of a thunderstorm adding gloominess to the track. However, instead of going with an out-of-place love ballad that slows the album down, the band maintains their true sound by playing a slower more dramatic composition that allows you to appreciate the sometimes lesser-heard keys of Brandon Bliss. Speaking of keys, “Things Get Better” has a great little keyboard section that reminds one of an old-timey saloon, but then cranks to 11 with the usual Monster Truck thoroughness. The next three tracks from “The Enforcer” all the way to “New Soul” are a consistent corpulent combination of ingredients that has paved way for Monster Truck’s classically bold rock ‘n’ roll idiosyncrasy. The album concludes with “Enjoy The Time,” a longer jam with an extended chorus that ends the album properly. This more conventional rock ballad provides a good wrap up of the album, taking things down and letting the audience mellow out after a progression of boisterous musical arrangements. It ends with an off mic voice going “that’s it, that’s all…” bringing it full circle to the intro line ready to reset the needle.

Overall Monster Truck’s Sittin’ Heavy album is another huge success and hard to believe it’s only number two. Packing in track after rock ‘n’ roll track, each song fits well into the next as far as speed and tone without making the listener’s mood fluctuate too much, which can take from the experience as a whole. Not an easy task in a world of singles. Give this album a go and just try not to bust out that old mud-stained denim jacket, grow the hair out long and don’t let the man keep ya down!

Here's what we think...
Spill Rating
Fan Rating
Rate Here
New Criteria
10
27.3
9.0
Total Spill Rating
27.3
Total Fan Rating
3 ratings
You have rated this
Album Reviews
album reviewsdine alone recordsdont tell me how to livemonster trucksittin' heavywhy are you not rocking?
album reviews, dine alone records, dont tell me how to live, monster truck, sittin' heavy, why are you not rocking?
About the Author
Dylan Weller