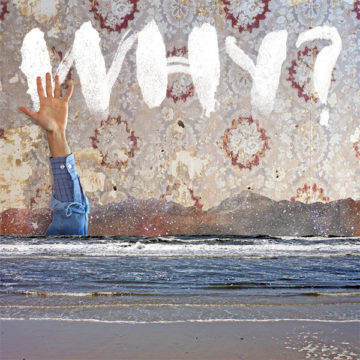 The band Why? evolved from artist Yoni Wolf, who had been using that name while performing in California.  Older brother, Josiah started working with Yoni, and  Doug McDiarmind joined the fold.   Yoni’s stage name became the band name.  Their debut album arrived in 2005 and this is album five for this band (Yoni is a member of several other bands/projects, all worth exploring).

This album brings it together for the brothers.  This is all of their influences, experiences, and performing coming together to form a fantastic album.  The whole album is really a trip.  Listen to the arrangements of voices at the end of “Proactive Evolution”, setting the mood and forcing the listener to tune into the sound, while “Easy” creeps into your consciousness with lyrics emerging… “easy anywhere I go…always tinged in sadness” The song brings a tear to a glass eye.  It is a work of art.

This band loves playing with sound and perception, the segue between songs are Beatlesque and help create the overarching feel of the album.  An album that touches on relationships, family, going home (when possible, but don’t get your hopes up).  And their use of backward tapes, slowed vocals, percussion (courtesy Josiah Wolf).  It is a creative album.

While their other albums have been interesting and intersected many genres, this album is clearly what they were working towards.  It is well recorded, well produced and well arranged.  And it plays like an album.  In other words, great care was given to song sequences, the album art, everything.

This band cannot be compared to anyone else.  And as such, they are producing some pretty timeless music.  They are not jumping any trends, but rather clearing their own path.  I have no idea what the title Moh Lhean means, or even how to pronounce it, but it does not matter.  It means whatever it means to you, and that is pretty cool in this day and age.

Another strong contender for album of the year and one that is going to be sitting comfortably on my turntable for the foreseeable future.

Born and raised in Whitby, Aaron discovered music through his love of The Beatles. This led to a career in radio, writing for various publications, and ultimately a radio show about The Beatles (Beatles Universe), which ran for over four years. When not immersed in music, Aaron enjoys spending time with the loves of his life -- his wife Andrea, and daughters Emily and Linda (all of whom have an intense love of music too).
RELATED ARTICLES
album reviewseasyjoyful noise recordings
8.0