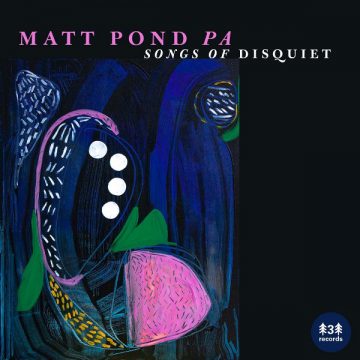 Matt Pond and Chris Hansen have been making music together for over a decade under the name Matt Pond PA. Their most recent batch of songs, an EP titled Songs of Disquiet, is soothing and pleasant, yet mostly forgettable.

The EP features a handful of covers, a few instrumentals, and an original song, all composed while the band was living in quarantine across different cities. Unfortunately, this is evident in the music. All of the songs have pleasant instrumentation, yet they ramble on in different directions without resolving.

One of the highlights on the album is “Pillar of Salt (Still)”, a gentle folk version of The Thermals’ 2006 song. Matt Pond PA has been fiddling with this cover for years, which is probably why two different versions of the song ended up on Songs of Disquiet. “Pillar of Salt (Stirred)” plays like a dance remix of the “(Still)” version, coming across as jarring and out of place on the EP.

The instrumentals (“Wild Strawberries”, “Summer Interlude”, “Face to Face”) are nice, but ultimately forgettable. A cover of Shocking Blue’s “Rock in the Sea” adds some much-needed energy and the cover of George Harrison’s “Give Me Love” features some great guitar work. All of the songs on the EP have strong instrumentation and lush production.

However, throughout the album, an unfortunate pattern emerges. Intricate melodies are washed out by synth, drowning the song in ambient noise. Nowhere is this more apparent than the opening track “The Start”. It begins with alternating guitar riffs, yet a steady synth chord bulldozes everything during the chorus. The same occurs in the final guitar solo on “Give Me Love”.

Matt Pond PA is a band of obviously talented musicians. The instrumental sections speak to their ability, but the production and song structure take away from the album as a whole. Still, the songs are pleasant and soothing. In these uncertain times, that may be enough for now.

Matt Pond PA is donating 100% of the album sales from BandCamp to the Save the Music Foundation.

Kieran Davey is a freelance writer and music enthusiast from Vancouver, Canada. He particularly enjoys alternative rock, groovy hip-hop, and basically any music from the 60's. Aside from reviewing music, he also loves playing guitar and spending time in nature.
RELATED ARTICLES
album reviewalbum reviews
8.0