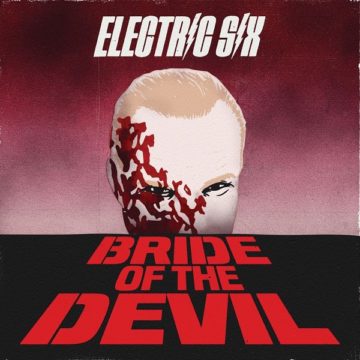 Electric Six have been making albums since 2003 (Fire, being their debut), and Bride Of The Devil is their 17th studio album. Not bad, considering how much this band tours. Basically, they are one of the hardest working bands today. The interesting thing is that their music does not suffer from their workload. They seem to love what they do and that is making music.

Bride Of The Devil is a fantastic album. It opens with the gritty and loud “The Opener”, a funny title and a great way to open. If you are going to kick off an album such as this, “The Opener” is the only way to go. Grinding guitars and screaming vocals from Dick Valentine, the only original member, and you know you are not in Josh Groban territory (and nothing against Groban).

The title track, “Bride Of The Devil” finds the band in a mellower mood, which does not make it a ballad. It is more melodic and a different pace from the majority of the songs. It is also a metaphor for Russian and U.S. relations. Just to drive the point home, their current tour is named ‘Russia, If You’re Listening’. It is “Daddy’s Boy” that is a more vicious political attack, this time towards Trump.

Produced by Electric Six’s  Christopher Tait (known as Tait Nucleus?)  and Matt Tompkins known as Rob Lower), they put the band through its paces and come up with a tight, cohesive 31-minute explosion of sound. The album features guests Tude Glase, Holspolo and Herb S Flowerings.

By the end, the band winds down for the most commercial and melodic song on the album, “Worm In The Wood”, an emotional and moving song that shows what Electric Six are capable of and proving they have a softer side.

Bride Of The Devil is a surprisingly complex album. It is not straight punk, it has many layers and is an album that requires many spins on the turntable. Given the length of time this band has been around, and the numerous member changes, they have still managed to make not only a consistent and cohesive album but one of the best in their career. Over the years, Electric Six have been incorrectly viewed as a punk and satirical band. This album demonstrates the diversity of the band and their ability to move both emotionally and politically. A thoughtful yet fun album, and it rocks.

Born and raised in Whitby, Aaron discovered music through his love of The Beatles. This led to a career in radio, writing for various publications, and ultimately a radio show about The Beatles (Beatles Universe), which ran for over four years. When not immersed in music, Aaron enjoys spending time with the loves of his life -- his wife Andrea, and daughters Emily and Linda (all of whom have an intense love of music too).
RELATED ARTICLES
album reviewalbum reviewschris tait
9.0