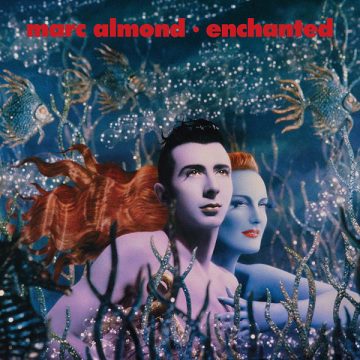 Enchanted was originally released in 1990 and was Marc Almond’s sixth solo outing after he took a break from Soft Cell. This album followed one of his most successful solo albums, The Stars We Are (although there was an independent release of Jacques Brel songs titled Jacques in between), so the expectations were very high, both by fans and his then record company Parlophone. Enchanted is cabaret pop, and commercially it missed the mark. However, do not mistake commercial success with quality, because Enchanted is an extremely good album, and it has aged extremely well. This new version, with an extra disc of fantastic extras, makes the one great album even better.

Enchanted was a departure in many ways for Almond. Most notably, he was no longer working with his backing band La Magia, who were made up, primarily, of members from his former backing band The Willing Sinners. Billy McGee is the surviving member, and he provides excellent bass and keyboards to help form the basis of the songs. And while it was a continuation of sorts of The Stars We Are, Almond took a step further into the world of pop music, incorporating dance and many other genres.

The other difference is that Almond wrote all of the songs, with two exceptions that were co-written with McGee. Although his first few albums were entirely solo, Almond fell into a pattern of co-writing.  Here, he sounds confident and moves from genre to genre with ease.  From the Roma sounds of “Madame De la Luna” to the pop of “Desperate Hours” to the more experimental/dance groove of  “Carnival Of Life”, his vocals are fantastic.

Enchanted is a long way from “Tainted Love” and even his earlier, grittier albums. Here, Almond still tells stories that are a bit gritty, only now he is sprinkling a little sparkle on the stories. He celebrates the characters in which he sings. He sings of cheating lovers, the unwanted people, and other sad stories, but surrounds the tales with such strong melodies that it is not a heavy album.

But that does not mean he doesn’t get dark, because he still does, with songs like “Death’s Diary”, where he takes on the role of Death as he tells of his work and the souls he collected but ends with an almost sympathetic glance at Death, “I’ve no distinction between pain and joy, No line twixt love and hate”. Not your typical lyric of a commercial pop album release, but Almond makes it work as he surrounds it with such dramatic and melodic music.

Enchanted has been supersized as a ‘Deluxe-Expanded Version’. As with The Stars We Are, B-sides, 12-inch mixes and demo versions have been added, as well as a DVD featuring the promo videos for the singles from the album. “A Lover Spurned” is particularly interesting and fun to watch. It is a very thoughtfully put together reissue. The demos add a great deal, as you can hear how songs became more produced for the final product. “Toreador In The Rain” is very interesting as a demo and one of the highlights of the actual album.

By 1990, Almond had come a long way from “Tainted Love” and in many ways he was still at the beginning of his solo career. Many other brilliant albums were to follow but Enchanted is an important album. It was the link that led to his future persona and proved to Almond that he could experiment and move into many different genres in the years to come. This re-release of Enchanted is an excellent chance for people to rediscover a brilliant and intelligent pop album.