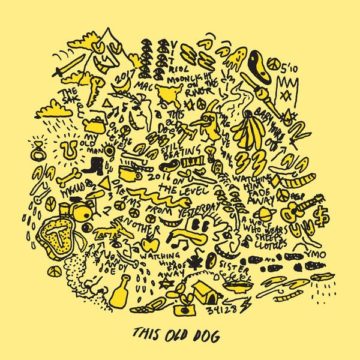 Nearly two years since his last release, Mac DeMarco returns with a collection of 13 songs, which may surprise some of his longtime fans. Known to many for his zany persona and onstage presence, This Old Dog, his latest release, seems more so that any album in his catalogue to contradict his often childish behavior.

From the opening track, “My Old Man”, you can hear that this is a going to be a different kind of record from Mr. DeMarco. His signature warbley, chorus-drenched guitar, which had dominated his previous releases is scarcely found on This Old Dog, and when it does make an appearance it’s generally mixed under the other instrumentation. Instead the “jizz jazz” king relies heavily on acoustic guitars, giving the vibe the songs were written around a campfire. While his previous sound was distinctive and charmingly quirky, it’s time for a change and This Old Dog is the perfect transition to a new musical direction.

The other half of the record sounds like it was composed for an unaired episode of Miami Vice. Tracks like “Dreams From Yesterday”, “For the First Time” and “On the Level” are soaked in cheesy-synthesizers, something Mac has flirted with in the past, but never exploited as much as he has here.

While Mac has shown signs of writing very mature lyrical pieces in the past, “Salad Days” comes to mind, the tracks on This Old Dog feature an underlying theme of adulthood and real maturity. In “My Old Man” he describes the feeling that many people can empathize with; realizing they’ve become more like their parents than they really ever wanted to be. However, in Mac’s case, he’s becoming more like his father, who he really never knew, and though he doesn’t want this to happen, he can’t stop the nature progression of aging. In the end, since he doesn’t really know his dad, he looks in the mirror and finds himself becoming unrecognizable. It’s perhaps the most profound song that he’s penned, yet incredibly simple.

His father, who became ill during the making of the album and also inspired the Lennon-esque ballad, “Watching Him Fading Away”. The lyrics are thoughtful and sensitive, yet each verse closes with a stinging remark about his father’s absence in his life: “The thought of him no longer being around/I’m sure it will be sad but not really different”.

Despite the maturity of his lyrics, he hasn’t lost his ability to write a good old-fashioned pop song. Tracks like “One Another” and “A Wolf Who Wears Sheeps Clothes” wouldn’t sound out of place on something like Rubber Soul. The latter, an infectious gem from the MacMaster, features one of his most beautiful vocal melodies and guitar lines.

Much to the disappointment of this fans, Mac has not enclosed his current address in the final moments of the LP, which he had done on 2015’s Another One. However, what they do have to look forward to is a remarkable singer-songwriter producing more incredible work.

As a child growing up in the suburbs, Ryan found music as a way to soothe his boredom. After first hearing AC/DC at the age of 10, he was hooked on music. Tracing its roots to the ‘50s, he became obsessed with Elvis, Buddy Holly and Chuck Berry. Somehow that led to grunge, then psych-rock, then jazz, etc. The list goes on and on and his collection of vinyl records continues to grow.
RELATED ARTICLES
album reviewscaptured tracksmac demarco
8.0