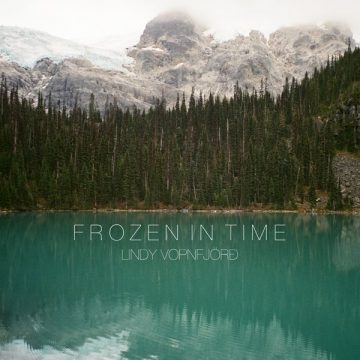 For his sixth full-length record, singer-songwriter Lindy Vopnfjörd takes his listeners on a tour of introspection with an instrumentally sparse and lyrically potent album. The record veers away from some of his pop-oriented work and focuses on the sentimentalities of a folk singer, returning Lindy to his roots.

Frozen In Time delivers an intimacy between Lindy and the listener. Recorded with producer, and longtime collaborator, Todor Kobakov, the record’s melodic resonance taps into a sincerity marked by serene imagery. The natural world is an important part of this record. It comes to life in songs like “Force of Nature” with the lines, “There’s a break in the dam and a crack in the earth/And how many deaths will rise from its berth?/And crumble the statues of men that are broken/And take back the dreams they had stolen”.

In typical folk-singer fashion, Lindy marries socio-political preoccupations with a focus on the vocals and guitars. The Icelandic-Canadian singer displays his mandate of telling stories for those unable to speak for themselves.

What makes these songs even more powerful is their relationship to real individuals. Two of the songs were inspired by Yeonmi Park and her desire to escape North Korea to reunite with family members. Another inspiration came from an English Professor who sent Lindy his diary when he was wrongfully imprisoned in India. Though the subject matter of these personal plights is sometimes dark, the melodic sensibilities along with Lindy’s soothing release, tenderly touches on these themes of oppression.

With its soothing sounds and dreamy vocals, Frozen In Time will no doubt keep you warm as these cold winter months narrow in.

Elizabeth is a Toronto via Caledon writer whose rural upbringing left a lasting love of anything with a banjo and an upright bass. She scours Toronto venues for both the musical talent and the beers on tap.
RELATED ARTICLES
album reviewslindy vopnfjördmelting
9.0