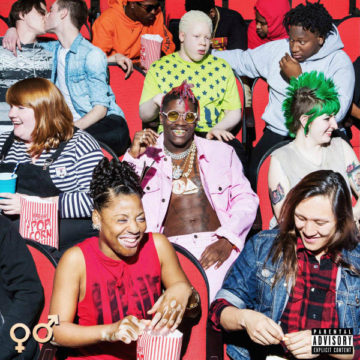 At a time when rap seems sometimes to be drifting aimlessly, lingering in the doldrums, along comes Atlanta, Georgia’s Lil Yachty. Without going overboard about his flow, it is fair to say that Lil Yachty, with his distinctive hair and ATLien style does rock the boat. Most of his lyrics make heavy use of profanity and explicit lyrics though at other times he does keep things on an even keel – there’s a lot of self-aggrandisement but sometimes he can be surprisingly tender, as on “Momma”, very much in the classic rap tradition. Not that he steers a middle course; he divides the hip hop audience like an icebreaker – you’re either on one side or the other, and he looks to appeal to those outside of the mainstream (look at the album cover).

His is admittedly not a titanic talent, and in places his limited lyrics and concerns suggest he is a one-liner, but then maybe that really is just teenage emotion. There’s Lil Yachty and his alter ego Lil Boat, the former wild and weird, the latter more formal and strange, but neither are happy to just coast. He has been championed by the likes of Kanye and Chance The Rapper, but he is achieving success under his own steam; he has already hit Billboard’s Hot 100 with ‘One Night/ Minnesota’ from his 2015 debut EP Summer Songs and is becoming in-demand for “featured artist” appearances.

He defines his music as “bubblegum trap”, and this album certainly shows just how apt that description can be – try the melodic ‘Better’ and ‘Bring It Back’ for the former. His backings can at times be, er, curious, to say the least, though they are always inventive, and he has drafted the likes of Migos, Evander Griiim, YG, Kamaiyah, Diplo, Sefflon Don and Sonyae Elise onto his crew to supply some needed variety. The set does get better as it progresses and with repeated listening. It will be interesting to see if Lil Yachty can sustain his current wave of success.

The Spill Magazine is a Toronto-based online publication dedicated to covering the independent music scene with a strong focus on our thriving hometown talent. Our writers bring you up-to-date news, in-depth features on musicians and reviews for the latest CD releases. We also travel to the front lines for all local festivals including Canadian Music Week and North by Northeast.Don’t forget to check out our Facebook and Twitter pages for all daily Spill updates.
RELATED ARTICLES
album reviewsforever younglil yachty
8.0