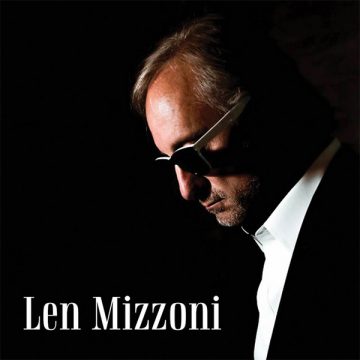 Len Mizzoni deserves a great deal of respect. The one-time member of Frozen Ghost has established a solo career in jazz-styled pop for himself over the past few years, a style in which it is not easy to develop a fan base. Mizzoni has succeeded through talent, dedication, and hard work. Len Mizzoni is his fourth studio album since 2018. This is his strongest album to date.

Mizzoni takes a few risks with this album. First by covering standards such as “Autumn Leaves” and “The Shadow Of Your Smile”, both classics and which carry a great deal of history. “Autumn Leaves” has a wonderful build, from a minimal percussion-based intro, to a full, yet stark, arrangement by the end. “The Shadow of Your Smile”, on the other hand, is a slow jazzy groove. In both cases the arrangements work and Mizzoni not only breathes no life into the songs, he makes them his own.

The remainder of the album are his originals. Barebones, piano and voice dominate the album.  In others hands, the songs would have been overproduced and heavy, but Mizzoni gives the songs their space and lets them float into the listener’s ears. “I Used To Love Looking In Your Eyes” is a stunning song of loss, while “Be Your Everything” is a more joyous song, well- arranged, very rhythmic, and catchy.

While finishing the album, Mizzoni suffered unimaginable loss, when his infant granddaughter Gabriella passed away very suddenly, and the album is dedicated to her.

In many ways, Mizzoni took huge chances with this album, and it paid off. He is not trying to be the next Bublé or Groban. He is Len Mizzoni and has created his own distinct style.

Born and raised in Whitby, Aaron discovered music through his love of The Beatles. This led to a career in radio, writing for various publications, and ultimately a radio show about The Beatles (Beatles Universe), which ran for over four years. When not immersed in music, Aaron enjoys spending time with the loves of his life -- his wife Andrea, and daughters Emily and Linda (all of whom have an intense love of music too).
RELATED ARTICLES
album reviewalbum reviewsfrozen ghost
9.0