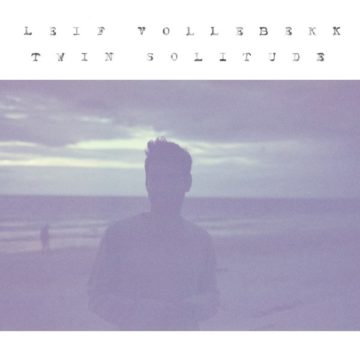 Four years since North Americana, Leif Vollebekk returns with his latest release and third record, Twin Solitude. The songs explore both interior and exterior aloneness, images of physical journeys aligning with excursions into personal reflection. These two disparate places meet together in one solitary state, which make the album’s title fit so well with its effect.

The Montreal singer songwriter has a warm and inviting voice with lyrics that can be colloquial and conversational as well as deeply poetic. Opener “Elegy” takes on the tone of the classic lament while subverting some of its meaning. Sanctuary, wine and cemetery gates are discussed alongside a leather jacket, black bandana and trash cans.

Throughout the record, the specificity of the images drives the movement of the songs with movielike care. “Into the Ether” and “Big Sky Country”, play second and third on the album, with one seeing someone ‘all fucked up on cocaine’ and the other delving into the expansive beauty of natural images with redwing blackbirds and wide-open skies. Though the content wavers, the meaning remains similar. In these two examples, the realities of connection and heartbreak express the confident precision of an experienced lyricist.

Twin Solitude was engineered by Dave Smith and recorded at his Breakglass Studios in Canada. The sparse beauty of Leif’s lyrics stands alongside the minimalism of the instrumentation, which includes piano, synthesizer, and strings.

The album ends with “Rest,” which is the longest track and finishes the record with a slow, easy release like a deep exhale: ‘I’m just gonna close my eyes/Rest is as good as sleep.’

Elizabeth is a Toronto via Caledon writer whose rural upbringing left a lasting love of anything with a banjo and an upright bass. She scours Toronto venues for both the musical talent and the beers on tap.
RELATED ARTICLES
album reviewsleif vollebekksecret city records
9.0