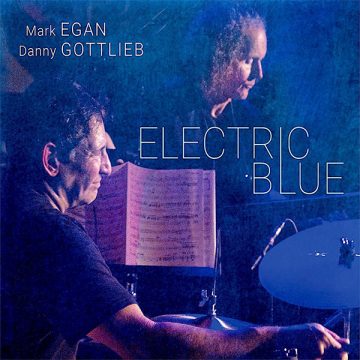 Mark Egan and Danny Gottlieb have been performing together for 49 years, whether it is with the Pat Metheny Group, or in their own band Elements, these two have worked together for a long time. Electric Blue is their first album as a duo. It is just them, Mark Egan on bass, and Danny Gottlieb on drums. The result is a fascinating and entertaining album. The album falls into the category of experimental, instrumental jazz, but it is much more than that.

I am no expert on jazz, but this album, to my ears,  has more in  common with an Eno album than it does jazz.  “Come What May” borders the ambient world, but it is not a typical jazz album. This is bass and drums, nothing else, and the two of them are able to create different moods, melodies, atmospheres, and songs simply with those two instruments. It is also not ‘easy listening’ jazz. The album is full of twists and turns.

It is hard to believe, at times, that there are no other  backing musicians, and it is just  these two in the studio. Gottlieb is able to create melodies and add to what Egan is putting out with his bass. It is a compliment to say that, at times, the listener is lulled into a world where one forgets that the music is being created by a duo, not a band.

The album was improvised, but again, you would never know it when listening. These songs are so well-crafted and constructed that each song becomes its own entity with its own identity. That is a difficult task to do when dealing with instrumental work. Even more impressive, the duo are utilizing bass and drums. I know it has been done, and what Egan and Gottlieb has done has created a new, original work that sits with the classics.

Listen to “Hooky” with an incredible melody, and dare I say, a melodic hook. Then contrast it with the incredible “Blue Sound Bath”, which again hovers near ambient music but never crosses that line. It is a moody piece, featuring great use of cymbals by Gottlieb against the mournful bass of Egan. It is a remarkable piece that also demonstrates the diversity of the music found in the grooves.

Electric Blue is an incredible album, with plenty to enjoy, but I will say that this is not for everyone. Adventurists and explorers, especially those who really love jazz, will find a lot to enjoy in this package. Find 47 minutes, get comfortable, turn down the lights, and enjoy the music that two musicians have created as a rhythm section.

Born and raised in Whitby, Aaron discovered music through his love of The Beatles. This led to a career in radio, writing for various publications, and ultimately a radio show about The Beatles (Beatles Universe), which ran for over four years. When not immersed in music, Aaron enjoys spending time with the loves of his life -- his wife Andrea, and daughters Emily and Linda (all of whom have an intense love of music too).
RELATED ARTICLES
album reviewalbum reviewselements
9.0