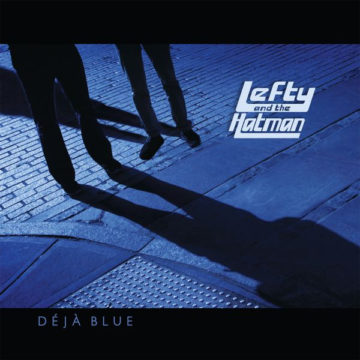 Lefty and The Hatman are actually Marc ‘The Hatman’ Mann and Jeffrey ‘Lefty’ Levine. Both have extensive and rather impressive histories in music. Mann, working with Jeff Lynne, Electric Light Orchestra, and George Harrison. In fact Mann played many of Harrison’s guitar parts in The Concert For George Harrison concert.  Levine has played with Joe Cocker along with many other artists. All that to say that these two very talented artists have combined their forces to create a solid blues-based rock album. Déjà Blue is their debut album.

The songs on Déjà Blue are rooted in blues, but they do have strong melodies, hooks and sometimes veer towards pop/rock. This is fine as this duo accomplish this feat with ease. Although both accomplished musicians, one cannot help but admire their use of vocals, especially on “Just Another Broken Heart” which features beautiful harmonies as the song fades. It is a very nice arrangement.

Although most of the songs revolve around love and love lost, they write strong lyrics that also reflect some very political thoughts. The album kicks off with the lines “My daddy worked for 30 years without a thanks. His pension…was stolen by the banks” in the song “Dumbstruck”. But the politics and message is personal, but the message is global. The song does not alienate, but rather, brings people together because it is a story. It also features a beautiful melody.

But it comes back to the playing. These two guys can play and the songs are well produced and well arranged. Mann provides some very tasteful guitar work and Levine’s piano/keyboard performance is equally outstanding. The blues form the base of Déjà Blue, but it is not a pure ‘blues’ album. Pop and rock weave throughout the songs, which means Lefty and The Hatman create their own unique sound and music.

Déjà Blue is a remarkably strong debut album from Lefty and The Hatman. Although these are seasoned musicians, many people may not know their names. This album should change all that as it should be the soundtrack for the summer. Known as session musicians, it is great to see them step into their own spotlight. A brilliant debut.