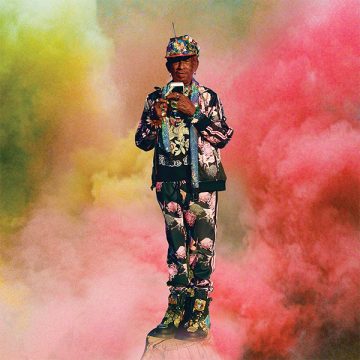 Lee “Scratch” Perry’s legacy of sonic innovation lives on beyond his sudden passing earlier this year on his new collaborative album with Vancouver-based duo, New Age Doom. Additionally, the album also features performances from Tim Lefebvre (The Black Crowes, Sting) and Donny McCaslin (David Bowie), among others. The aptly titled Lee “Scratch” Perry’s Guide To The Universe is a musical adventure over the course of six songs that indulges and revels in an experimental nature, making for a fitting send off for Perry as one of the final projects he worked on.

Opening with the abstract drone of “Life Is An Experiment”, Perry’s vocals can be heard reciting a melodic and spontaneous spoken word poem. His voice, thin and older, sounds truly emancipated, with a tone reminiscent of Perry Farrell. Musically, the song is an exercise in restraint and improvisation. With little holding it together, Lee “Scratch” Perry’s Guide To The Universe opens on a truly experimental note and continues to do so as the drone of “Life Is An Experiment” bleeds straight into the following song, “Holy Wings”. The latter of the two continues to slowly develop on the initial drone with improvised additions of horns, percussion, and electronic textures overtop the continuous bass and loose drums. While not the traditional sense of jazz in the avant-garde context, Lee “Scratch” Perry’s Guide To The Universe very much lends itself to such.

“Holy Wings” closes with a bombastic, yet tasteful, explosion of drums and percussion, one which continues into “Fly In The World”, a song far more rhythmic and energetic than the previous two offerings. At this point it is clear that, while the tracklisting may state six individual songs, the album is actually one song, divided into six chapters. Among this musical journey are highlights such as the riff-based ostinato of “Holy Dub” and the groove heavy acid-funk of “Step In Space”, a song that delivers a haunting sense of excitement to the record. Furthermore, the album comes to a climatic close with cinematic and electronically driven “Conquer The Sin”, a song that builds upon itself to create a simple, yet undeniably raw level of intensity.

While many artists indulge in experimental songwriting through use of different textures or incorporating elements from different genres into their sound, Lee “Scratch” Perry’s Guide To The Universe is a genuine experiment in every sense of the word. New Age Doom have crafted a sonic oasis unlike much else you’ll find today; a true cacophony of musical adventure. Largely based on jazz, the album – a record designed to feel like a single track evolving organically over the course of just under forty minutes – is a modernization of the avant-garde tradition with loose arrangements that allows for an aura of improvisation over a wide array of instrumentation. While it’s not something you may throw on repeat given the nature of the music, New Age Doom’s experiment is a bonafide success; ultimately making for a fitting and cosmic outing for Perry.

A passion for music has always been a part of Gerrod’s life. As a young boy, he was raised on a steady diet of the music from The Chili Peppers, Aerosmith, The Stones, Prince, and others from his mum. Raised in the GTA, Gerrod continued to foster his love for music by attending a wide range of concerts and learning the drums. His unapologetic passion for music has no bounds and has spread to a wide variety of styles, whether it be the 90’s rock that sound tracked his teenage years, the jazz he studied in university, or his newfound love for hip-hop. He recently received his bachelors in music and education from York University and is passionate about writing and reviewing good (and less than good) music. Gerrod is also the drummer and songwriter for a Toronto based rock & roll band, One In The Chamber.
RELATED ARTICLES
album reviewalbum reviewswe are busy bodies
7.0