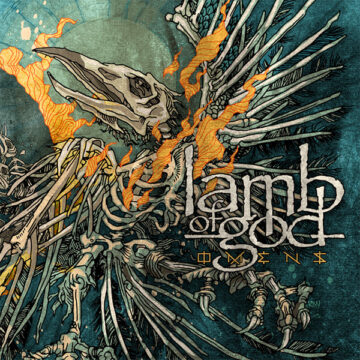 America’s premier modern metal outfit, Lamb Of God, has returned with its latest album, Omens. The new record is the band’s first collection of new music since 2020’s self-titled release – their first with Art Cruz on drums with a deluxe edition following in 2021— and sees the band return to true form with a record that can stand beside the band’s classic material.

Opening with the explosive lead single, “Nevermore”, Omens kicks off with a flurry of drums and dissonant chords, allowing for Randy Blythe’s vocals to develop from a gravelly spoken tone before erupting into his signature scream. Of the three singles released – “Omens” and “Grayscale” – “Nevermore” is certainly the strongest as the band employs vocal melodies to contrast against the unrelenting instrumentals, not to mention the brief, but killer guitar solo from Mark Morton. This, however, is not to say that “Omens” and “Grayscale” are lacking, in fact, both tracks serve as strong entries on the record, delivering what one should come to expect from Lamb Of God.

Across the ten tracks on the album, Lamb Of God soars as the band takes creative risks in its songwriting to deliver a truly volatile record. The use of softer melodies on “Nevermore”, “Gomorrah”, and the climatic album closer, “September Song”, while limited, feels fresh, demonstrating growth in the band’s creative process. Additional highlights include the thrash metal inspired “Denial Mechanism” and the groove-heavy “To The Grave”. Without a doubt, however, of the ten tracks, “Ditch” clearly stands as a cut above the rest. Propelled by the full force of the band, Blythe’s vocals sound absolutely massive – especially on his opening line as he cuts through the instrumentals – with a hard-hitting and catchy chorus. “Ditch” will turn heads” and feels like an instant classic from the veteran metal band.

Without a weak moment on the album, Omens stands above 2020’s Lamb Of God simply for the mere reason that they refused to play it safe this round. Rather, Omens feels like Lamb Of God have picked up from where they left off on VII: Sturm Und Drang. Their use of melodic passages – while not as involved as in 2015 – elevates Omens as the band continues to evolve its sound, all without sacrificing its dark tone and bombastic nature. Ultimately, Omens marks a progressive and promising step forward for Lamb of God.