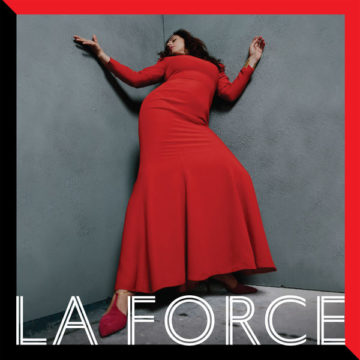 Ariel Engle, aka La Force, is a dynamic performer with oodles of talent who has, in less than two years, become a permanent member of the Canadian indie collective Broken Social Scene, toured in support of Patrick Watson (she will continue to support the European leg of his 2018 tour), and has now released her major label debut.

Though her self-titled debut lacks in length, it lacks nothing in variety with the nine tracks demonstrating the wealth of vocal talent that Engle offers. Inevitably, especially considering Kevin Drew is on production duties, there are more than a few moments that remind the listener of Broken Social Scene, not least third track “Ready to Run”, but as a whole, this is an album that is never less than interesting and is at times downright captivating. Though it is the most sparse of the album’s offerings musically, “Lucky One” is a standout song vocally and lyrically as Engle laments on the loss of love, or its ability to change over time.

La Force is a compelling album from an obviously precocious talent; considering the community that she has already begun to surround herself with, we can only imagine that this is far from the last time we will be reviewing one of her albums or heaping praise upon it.

Br. lives in southern Ontario, grew up on The Beatles and The Journeymen, spent his adolescence immersed in grunge, and his adulthood in British alternative. His greatest joy is seeing his son dance and grow into his own appreciation of the indescribable joy of music...
RELATED ARTICLES
album reviewalbum reviewsariel engle
8.0