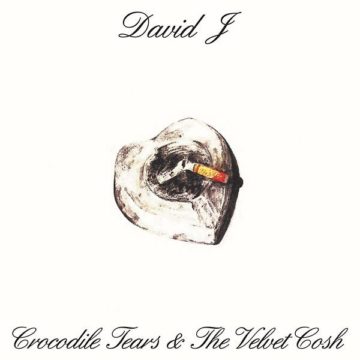 David J. Haskins has been in a couple of bands with his brother, Kevin. Bauhaus, and Love And Rockets. But what many people have forgotten, over time, is that David J released several solo records that were brilliant and very different from the music from those two bands.  Crocodile Tears And The Velvet Cosh was originally released in 1985 and was David J’s  second solo album (his first for the Glass record label).

On Crocodile Tears And The Velvet Cosh, the songs are shorter, much poppier and more direct. Some of this will get transferred into the work with Love And Rockets, but here David J writes what seem to be personal songs, listen to the beautiful and moving “Justine” with lyrics such as

This is poetry and just one example of the songs found in this collection.

Musically, it is not as dark as one would imagine. The song structures are more conventional than with Bauhaus and many of the songs would not be out of place on a Jazz Butcher album. It will not disappoint fans but allow them to see a different side to David J. Those of us of a certain age may remember when this album was originally released and get to  rediscover this  lost gem. It is like seeing an old friend after many years.

This is a straight rerelease on vinyl, there is no bonus material, but that should not matter. Glass Modern, which is an offshoot of the original label, Glass Records, who originally released the album have done a great job with this rerelease. It sounds great and has not lost any of its original sound.

It is a brilliant album that has been neglected for far too long. I am glad it is available again. The timing is quite interesting as well, as David J is getting set to perform some concerts in the U.K. with old friend Peter Murphy.

David J remains active in making music and has recently published his memoirs about Bauhaus and his professional musical career. Crocodile Tears And The Velvet Cosh serves as a reminder to his early solo recording days and what a different time in music. It does not sound dated and stands up remarkably well in 2018, maybe even better than some Bauhaus music.

Born and raised in Whitby, Aaron discovered music through his love of The Beatles. This led to a career in radio, writing for various publications, and ultimately a radio show about The Beatles (Beatles Universe), which ran for over four years. When not immersed in music, Aaron enjoys spending time with the loves of his life -- his wife Andrea, and daughters Emily and Linda (all of whom have an intense love of music too).
RELATED ARTICLES
album reviewalbum reviewsbauhaus
9.0