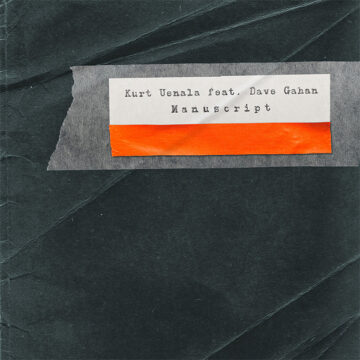 There was so much music created during the pandemic that reflects the isolation and desolation it created. Yet, some of this music really hit the mark in reflecting such feelings in us all.

Kurt Uenala, also known as Null + Void, who now resides in Iceland is probably no stranger to isolation, moving there after working for years in Depeche Mode and Dave Gahan’s studio in New York.

So, working in remote surroundings and being alone and isolated is something Uenala is quite aware of and remembering that Gahan is always jotting down short haiku-like, as Gahan described them “thoughts, feelings, and observations that would likely never see the light of day.”  But, Uenala remembered those notes, and proposed to Gahan to read them as tone poems that he would back with his electronics.

The results are recorded in these six pieces that comprise Manuscript, and the results, these muted, meditative sketches definitely reflect the mood of isolation. That is probably because thoughts, like these of Gahan’s we all come to being alone, possibly isolated and contemplative, the reason these Uenala & Gahan tone poems definitely hit the mark.

Formerly a lot of things, including a journalist and a translator, currently a freelance writer living in The Netherlands.
RELATED ARTICLES
album reviewalbum reviewsdave gahan
8.0