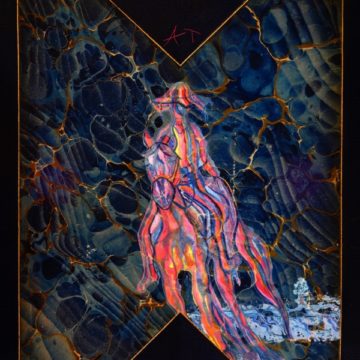 Animal Collective’s Avey Tare is back with a psychedelic and aquatic new take on Americana, folk music, and everything of their ilk. His third studio album, Cows on Hourglass Pond, is one of my most anticipated albums of the year. From the lead single “Saturdays (Again)” to some of the deeper cuts, the album shimmers with the same languid vigor as the sun off of a lake.

The lyrics in the album defy explanation for anyone but Avey, yet that’s part of their charm. The whole album is drenched in a film of impenetrability, which repeated listens don’t break, but make peace with. The dualistic sound of the album, obvious in the juxtaposition of reverb drenched backing sound effects and pads with traditional folk and country instrumentation, is perfect for the feelings it imbues the listeners with. It’s a slightly sinister look into an isolated country homestead, but one you can’t help but want to stay in forever. Like a bed that’s too big in the pitch blackness but covered in warm blankets, the album always begs you to stay just a bit longer.

Hello! I’m Cody McIntosh! I’m a lifelong music fan, blogger, student, writer, and musician, and guitar teacher. I’ve been playing and listening for over half of my life now and I don’t intend on stopping anytime soon. Some of my favorite genres are 80’s New Wave and Post-punk, Hardcore, Jazz, Garage Rock, and IDM. You can find me at a few places online, but below are the main few.
RELATED ARTICLES
album reviewalbum reviewsanimal collective
8.0