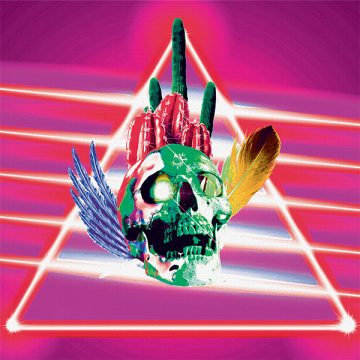 Karate, Guns & Tanning have released their debut album, Concrete Beach, along with its hypnotic lead single “Graffiti”, which comes with a hallucinatory and surrealist animated music video.

KGT is the newest band formed by midwesterners Valerie Green and Paige Shedleski. Their long partnership and a wide variety of influences have resulted in a surround sound symphony which combines post-punk, shoegaze, and psychedelic dream pop with elements like the Riot Grrrl movement and grotesque art.

The mystic and ambient intro “Fire” sets the tone for an album that challenges the boundaries of sound and imagination.

Driven by a heavy and grungy bass line, “Badlands” is a booming and catchy track that captures and holds the listener’s attention while a building synth riff that leads into a pissed off, face melting solo.

“Artifacts” refers to the feeling being trapped by something that can’t be seen. In what has to be one of the best songs off this release, it immediately hooks listeners with an impossibly catchy intro riff which drops into a multi-layered, head bopping, new wave synthesized blast, with grungy, post-punk inspired vocals adding another element to this inescapable track.

With another EP in the works keep your eye out for this exciting new group!

I’m Mike from Peterborough, ON. I have spent the majority of my life obsessing over music. I am enamoured with the evolution of music, and the stories behind the artists creating it.
RELATED ARTICLES
album reviewalbum reviews
7.0