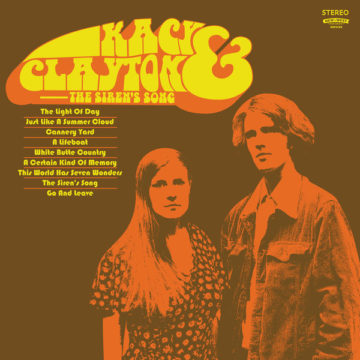 Second cousins Kacy Anderson and Clayton Linthicum seem like they’re part of a bygone era. It’s not just their retro cover art, the disco-ball cuts in music videos, or their dreamy ’70s-stepped sound reminiscent of the British folk movement. There’s something else under the surface, a timelessness and depth that resonates in the lilt of Kacy’s vocal and the precision of Clayton’s instrumentation.

With their third album, The Siren’s Song, the Saskatchewan natives add another dimension to their duo, with the influence of the record’s producer Jeff Tweedy (Wilco), and the addition of bass and drums in their sound. The album feels intimate and grandiose all at once, exploring the quotidian and the mythic, from empty church pews and faded photographs, to wine-stained lips and mighty ships, these images are stark and vividly drawn, somehow both larger-than-life and as mundane as the everyday.

The nine tracks speak to disillusionment, world-weary fears, unrequited love and a sense of directionless, but they are not without a tinge of comedy either. “A Lifeboat” begins with the lines: If envy was tequila, and jealousy strong beer/We could throw a party that would last throughout the year, before exposing a loneliness far less glib: Now your face is flushed and your eyes are bloodshot red/You can’t take it on your own so you take a stranger home instead.

Another part of Kacy & Clayton’s seemingly timeless appeal is the sincerity the folk-rock duo evokes. There is an underpinning of earnestness supported by the wit of the lyrics and elevated by their musical gifts. There are moments in the album that are driven by a vulnerability so honest its hard not to connect with. Such is the case in “Just Like A Summer Cloud” with Kacy’s utterance: “Can we just make this simple/The way love ought to be/I still want to be with you/If you still want to be with me.”

The album’s title reminds us of the Sirens of Greek mythology and it feels like an apt comparison. Much like the Siren’s Song it alludes to, there is something alluring and elusive in this record, haunting and hard to capture in words.

Elizabeth is a Toronto via Caledon writer whose rural upbringing left a lasting love of anything with a banjo and an upright bass. She scours Toronto venues for both the musical talent and the beers on tap.
RELATED ARTICLES
album reviewsnew west recordsthe siren's song
8.0