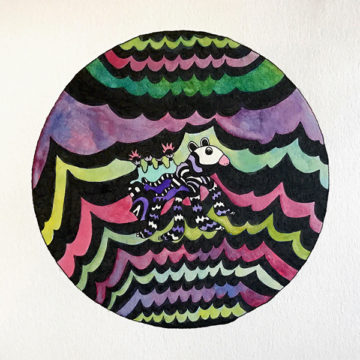 Perhaps it is the move to Asthmatic Kitty, or perhaps it is his own growth, but  on this album,his second, Angelo De ugustine has delivered a deeply personal album and incredibly strong music to accompany his thoughts. He has officially nailed it.

Swim Inside The Moon is hard to categorize. Folk comes to mind, but it is more than that, it is his own sound. He builds on the art form of folk and creates a big sound with just voice and guitar. This is no easy accomplishment. He delivers a great deal in a very simple way.

According to De Augustine, he recorded this album in his bathtub using a Shure microphone and a reel to reel deck. If so, he should record there more often. The sound of his voice with his guitar is heartbreaking and so distinctly his own.

Listen to “On My Way Home”, his double tracked backing vocals, guitar riff and lead vocals that combine pleading with joy is marvelous and invokes a great many feelings. This is the sound of someone sharing his intimate thoughts, desires, and hopes, all within five minutes. This is amazing.

Perhaps “I Hope That All Your Dreams Come True” sums up Swim Inside The Moon. Here he is singing to a friend and perhaps himself. “Dreams have left me off balance, I hope you stay the same.” He sings in the song, and concludes with “Back on the Floor Searching for clouds that came before.” Poetic, and stunning. De Augustine has come up with something that pierces the soul, and again, it is his voice and simple accompaniment that sends the song to a whole other level.

Swim Inside The Moon is a rare album. An album of intense beauty and an album that cries out to be listened to. This is not something to put on at Starbucks while people chat. No, this is the album that is best listened to with headphones, uninterrupted. It is like a good novel, start at the beginning and go with it until the dying notes of the last song.

Born and raised in Whitby, Aaron discovered music through his love of The Beatles. This led to a career in radio, writing for various publications, and ultimately a radio show about The Beatles (Beatles Universe), which ran for over four years. When not immersed in music, Aaron enjoys spending time with the loves of his life -- his wife Andrea, and daughters Emily and Linda (all of whom have an intense love of music too).
RELATED ARTICLES
album reviewsangelo de augustineasthmatic kitty
9.0