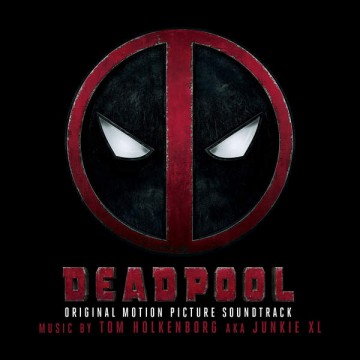 On February 12th, Deadpool broke Box office records by reaching $300 million and holds the award for Top Grossing Rated-R Film on opening weekend, ever. But who gets this honour? None other than the Grammy-nominated multi-platinum selling producer and composer, Tom Holkenborg better known as Junkie XL. Sometimes referred to as JXL; he “is a Dutch multi-instrumentalist, composer, producer, and engineer” known for his reputation in musical experimentation. Once asked in an interview what the “XL” stood for he replied “The ‘XL’ stands for expanding limits; broadening up your vision.” What would I recognize him from you ask? Mad Max: Fury Road (2015), Divergent (2014) , and 300: Rise of an Empire (2014) are just a few of the more recent musical scorings he has done. JXL has also been involved in such classics as The Dark Knight Rises (2012) and Resident Evil (2002).

The Soundtrack in itself is a dramatically absurd masterpiece. A combination of melodic comedic timing over the colorful spectacle being portrayed. Paired along with eerie instrumentals that give you the uneasiness as if shadows are following you in a tense situation. All of which is the tasty essence of this soundtrack. The recordings play parallel to the preposterous tom foolery that makes up the Deadpool: Original Motion Picture Soundtrack.

The scoring begins with the serenading sounds of a piano keys introducing “Angel in the Morning” sung by Juice Newton. Originally written and composed by New York-born songwriter Chip Taylor*. This song choice on its own would seem like a bold choice given the power structure and vocals of the song sending a clear more upbeat loving mood. This Beautiful ballad over the scenes of what slowly gets revealed as an ongoing shot continuously panning through a freeze frame of an ultra-violence style event set in a black SUV. As the picture unfolds the initial atmosphere seemed quite appropriately F.U.B.A.R. If you were unsure of the humorous amalgamation before they get you with a series of satirical movie credits that enter the screen of stereotypical movie roles leading to waves of laughter among the audience. Over the course of the song the scene begins to speedily play out before Deadpool begins the job of explaining his origins to the viewer. “Max Effort” is the first instrumental track that compliments a high-speed encounter on a highway with many foes. It start with low bass hums followed by electronic drops followed by heavy drum roles, synthesizers and what sounded like electronic pan flutes. This continues fast paced and intense keeping along with the scenes striking speed. The tracks are all appropriately named after either a one liner or theme in that particular scene which adds another humorous aspect to the album.

Tracks like : “Small Disruption” a classic sounding superhero song we’ve to love since the early big budget Marvel days and “12 Bullets” which sounds like Hawaii 5’0 mashed up with an NES on acid , you know, in a good way. Between these two songs “Shoop” by Salt-N-Peppa; again a another great paradoxical song given the environment laid out because of the songs sound of innocence and absurdity in the chosen landscapes circumstances. The chorus of this song is a very catchy so be warned. Shoop shoopa doop shoopa shoopa shoop a doop…

All of the produced tracks set a clear mood for the scene usually slow and dramatic or fast paced and action packed and filled with fighting. After a few atmospheric play-throughs there is an another trivial nostalgic song that gets played. Usually juxtaposed opposite an extreme situation or accompanying an eccentric montage such as “Calendar Girl” (The 1999 Remastered Version) by Neil Sedaka over a wholehearted holiday-sex-montage.

What makes a classic Hero or in this case, Anti-hero movie? A well produced theme song. The twist on this one is it was done by a group called TeamHeadKick an Internet-based gaming rap group who “make music by gamers, for gamers with studio quality recordings.” Giving this hero’s theme some nerd cred. One of the longer pieces on the soundtrack is titled “This place looks sanitary” it is an excellent example of how a movie backing track can be very subtle yet still add a lot of affect to the visuals being portrayed while not being to over powering to take away from the viewer/listeners experience. “X Gunna give it to ya!” Makes an appearance and is a fantastically all-encompassing track to throw in to the DP Project. The song itself is a vary aggressive pump up style rap by none other the DMX. The graphic and uncensored lyrics in this song fit right into the R-Rated Gore, Nudity and violence of the film. It also plays on the fact Deadpool is also one of the weapon X experiments being a fun/corny pun as is one of Deadpool’s many quirks.

Concluding the album is “Going Commando” up to “A face I would sit on” this portion of the ST follows the roller coaster of a final act from frenzied fights and moments of unrest for the character. These songs filled with gallivant chord progressions and build ups to heavy drum fills with abrupt timing to build up anxiety and tension. From each victory and heartfelt moment all add shimmering layers to each individual atmosphere. But where does this rampant excursion take us? Don’t worry, It ends on the cheesiest note most appropriately possible ,“Careless Whisper” by George Michaels. A song with only the most recognizably seductive saxophone solo of all time currently meme-ing its way across the Internet as you read.

This is the kind of Album line up that only makes sense for something as wild as a Deadpool movie. The Over all mood setting and scene enhancement of the background tracks were interesting yet not to over-powering enough to take aways from the unrestrained happenings of Deadpool’s story. That combined with the perfect comedic timing and content of the few other tracks not produced by JUNKIE XL on the album. Deadpool: OST is another well done superhero Block-Buster scored by JUNKIE XL. You can check out his latest scoring work as he co-composes on the upcoming 2016 film Batman vs. Superman: Dawn of Justice along side Hans Zimmer.