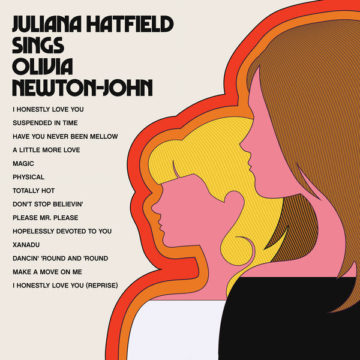 Juliana Hatfield has been around a while. Her resume is quite extensive and impressive: The Blake Babies, The Lemonheads,  The Juliana Hatfield Three and her solo career. She has released 13 solo albums and many other albums with the other bands. Juliana Hatfield Sings Olivia Newton-John is her 14th release and it is not as unexpected as one might think.

The title initially throws you, but when you think about it, Hatfield has always had a very pop oriented side. Here, she just lets it out completely. The album also serves as a benefit album. Money from the sale of the album will be donated to the Olivia Newton-John Cancer Wellness & Research Centre (ONJ Centre), an organization helping patients with cancer access leading medical treatment. The album also got Ms. Newton-John’s seal of approval.

But, you might ask, what is the album like? Has she altered the songs, turned them upside down? Are these serious covers? The answer is yes, these are serious and faithful covers. She pretty much sticks to the original arrangements and does not stray very far from any of the songs. In fact, there were times when it sounded like the original version. Listen to her cover of “Xanadu”, a near perfect replica of the original. The only thing missing is Jeff Lynne’s production and backing vocals.

But in true Hatfield style, she strays from the hits and covers some lesser known album cuts. Clearly, Hatfield is a fan and knows these albums. Listeners will hear her version of massive hits, such as “Physical” but also her version of “Dancin’ Round and Round” from the 1978 album, Totally Hot. She also covers the title track.

The album would have benefited from Hatfield putting her own distinct spin on some of the songs. She does not reinterpret the songs, but provides a faithful cover, like a very good bar band. Newton-John fans may have complained but it would have made the album more interesting. And why did she not cover “What Is Life” or “Twist Of Fate”?

Overall, a sincere tribute from one artist to another. Hatfield is clearly a fan who has been influenced by Newton-John and let’s face it, she did break down some barriers in the 1970s and 1980s for women in pop, dance, country, and even folk. Not a bad legacy, and Juliana Hatfield Sings Olivia Newton-John pays tribute to that legacy.

Born and raised in Whitby, Aaron discovered music through his love of The Beatles. This led to a career in radio, writing for various publications, and ultimately a radio show about The Beatles (Beatles Universe), which ran for over four years. When not immersed in music, Aaron enjoys spending time with the loves of his life -- his wife Andrea, and daughters Emily and Linda (all of whom have an intense love of music too).
RELATED ARTICLES
album reviewsamerican laundromat recordsjuliana hatfield
9.0