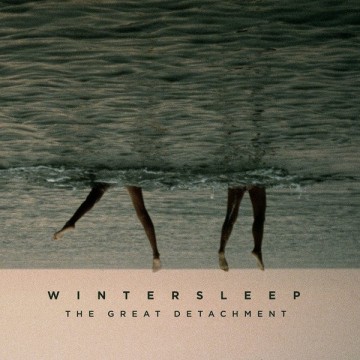 A few years ago, economist and Freakonomics co-author Stephen Dubner declared McDonald’s McDouble hamburger to be the “cheapest and most nutritious food in human history”, measuring its price against its nutritional value.  Now,  no one’s going to get in better shape by scarfing down a bunch of cheeseburgers, but if you’re living on fifteen dollars a day, it may be the best means to an end in terms of sustenance.  Wintersleep’s new record, The Great Detachment, pleads a similar case: the production is crisp, the songs are digestible, and if you only have terrestrial radio at your disposal, you could do a lot worse than hearing “Amerika” four to six times a day at your part-time retail job.

The Great Detachment is music for the casual listener.  It is the soundtrack to a young parent running errands, a tech-savvy friend showing off his new Bluetooth-enabled sound system, a work retreat or a Verizon commercial.  And that’s not necessarily a bad thing:  The Great Detachment is ripe with massive drums, richly layered vocal harmonies,  and vocalist/guitarist Paul Murphy’s matter-of-fact murmur that sounds like a passive-aggressive Spencer Krug with a chip on his shoulder.

There are also some really good tracks on here that remind the listener that Wintersleep can still challenge its audience when they feel like it.  “Metropolis” is five minutes of broody, gorgeous hopelessness, and “Freak Out” is chock full of hooky choruses and spacey guitars.

With five full lengths, an opening slot for Sir Paul McCartney, and a Juno award already under their belt, it’s no surprise that the band has written such a giant, polished record. The scope of the album suggests an understanding among the band members that they’re ready to make big money.  Songs like “Love Lies” and “Spirit” beg to be that set opener with the planetarium light show that would earn them a much-coveted eight or nine pm slot at Osheaga. The Great Detachment really shoots for the moon, and will probably find the band more commercial success, but some personality is lost along the way.

Marko Woloshyn is a Mississauga-based writer and musician. He owns a limited edition repressing of Mclusky Do Dallas and one time at a concert a drunk woman told him he looked like Keira Knightley.
RELATED ARTICLES
album reviewsamerikadine alone records
8.0