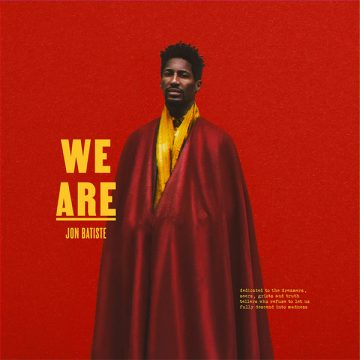 Jon Batiste
We Are
Universal Music

Hot off his work as the jazz coordinator for Pixar’s Soul, The Late Show With Stephen Colbert bandleader,  Jon Batiste, has returned with his eighth solo album, We Are. Following his sublime 2020 release, Meditations with Cory Wong, and his acclaimed 2018 record, Hollywood Africans, Batiste’s return is highly anticipated and welcomed with a soulful album that bridges ‘70s funk, gospel, and R&B with modern musings and flair.

We Are opens with the celebratory title track. Featuring the St. Augustine High School Marching 100 and Gospel Soul Children, “We Are” is a positive sonic affirmation that, for that alone, feels like a breath of fresh air, especially when you combine the extended outro featuring the marching band feel and the lush gospel accents throughout the song. For all the triumph embodied in “We Are”, the album continues with the equally upbeat James Brown strut of “Tell The Truth”. Backed by a full horn section, Batiste’s vocals are raspy, staccato, and commanding. This is funk for a new generation.

As We Are continues forward, there is no shortage of highlights. “I Need You” is an absolute bop driven by a bouncing verse that features rich melodies and seamless rapping, followed by a simple but incredible chorus, once again sung. The combination of melodic and fast paced hip-hop is reminiscent of André 3000, while the on-and-off call and response sections keep the track in tune with traditional gospel performance. The Outkast vibes only continue on the following “Whatchutalkinbout”. Batiste’s vocals – both sung and rapped – are top notch,

and the instrumental arrangements and shifts in melodies, harmony, and rhythm are sophisticated but remain entirely organic. Additional high marks for We Are include “Boy Hood” (featuring PJ Morton and Trombone Shorty), the prince inspired soul and harmonies of “Adulthood” (featuring Hot 8 Brass Band), the groovy “Freedom”, and the pop charged “Show Me The Way” (featuring Zadie Smith). Regardless, there is not a weak track on We Are; dare I say, at its worst, We Are is only great.

We Are is a stellar album that connects a rich level of tradition and modernity together proving Batiste is as steeped in classic gospel, soul, jazz, and funk as he is the pop and hip-hop of the last two decades. Furthermore, We Are is ties together a level of simplicity with sublime technical genius, making it a record that should be admired equally for its musicianship and intricate songwriting as for its ability to seemingly fit in with the contemporary music of today. If We Are demonstrates anything, it is that Batiste is peerless in his creativity and delivery. Often nostalgic for other eras and artists, Batiste remains truly unique as he joins the class of Kendrick Lamar, Anderson. Paak, and Gary Clark Jr. only in the sense that We Are is a record unlike anything else in the last decade and could only have been written by Batiste.

A passion for music has always been a part of Gerrod’s life. As a young boy, he was raised on a steady diet of the music from The Chili Peppers, Aerosmith, The Stones, Prince, and others from his mum. Raised in the GTA, Gerrod continued to foster his love for music by attending a wide range of concerts and learning the drums. His unapologetic passion for music has no bounds and has spread to a wide variety of styles, whether it be the 90’s rock that sound tracked his teenage years, the jazz he studied in university, or his newfound love for hip-hop. He recently received his bachelors in music and education from York University and is passionate about writing and reviewing good (and less than good) music. Gerrod is also the drummer and songwriter for a Toronto based rock & roll band, One In The Chamber.
RELATED ARTICLES
album reviewalbum reviewsi need you
9.0